I tell my self the last major part I need to buy is the drive shaft. I am sure there are other things that will take money, but the drive shaft seems like the last barrier to driving. The other things would all be about finishing or comfort. Back to Modern Driveline to finish what I started there.

I ended up ordering a custom aluminum driveshaft. It was only slightly more than the steel, and I don’t remember what it was that made me choose it, but I did. Probably that salesman recommended it.

In order to finish the order, I had to crawl under the car and get some measurements. They already knew what I had on the transmission side since my order was still in the system from last year. Not being educated on such things yet, the rear universal joint for the pinion yoke was a mystery. I think it came off a 69 mustang, and I know it was an 8 inch. I had to take some measurements and let MD send me what I needed. This probably would have been a good opportunity to do some research, but that would have been easy.

After a few weeks, the driveshaft arrived. It looks cool, so that must be why I upgraded. It’s also lighter than I expected, but aluminum is like that I suppose. I already had the back end on jack stands, so I just had to get under it and man handle the driveshaft into place. It turns out lighter here was a good call. Laying on my back holding it up while I mess with the u-joint would be more difficult with the extra weight.

It easily slid into the transmission and seated well. On the pinion side, I started getting my education. First, I seem to be missing some parts. It seems this style has snap rings on the 2 caps attached to the driveshaft, but a couple of U bolts attaching the other caps to the pinion yoke.

I did some googling, and it seems the U bolts (also called u-joint straps) were the same from any of the mustang suppliers online and at the local Autozone. The difference being at Autozone, they were in stock, and under $8 for the pair. With those in hand, I went back to trying to connect the dots. It was easy enough to get things in place, but now I can see the u-joint caps were not snug in the recess where I would expect them to be. They had a lot of slop, so clearly too small.  Back to google. 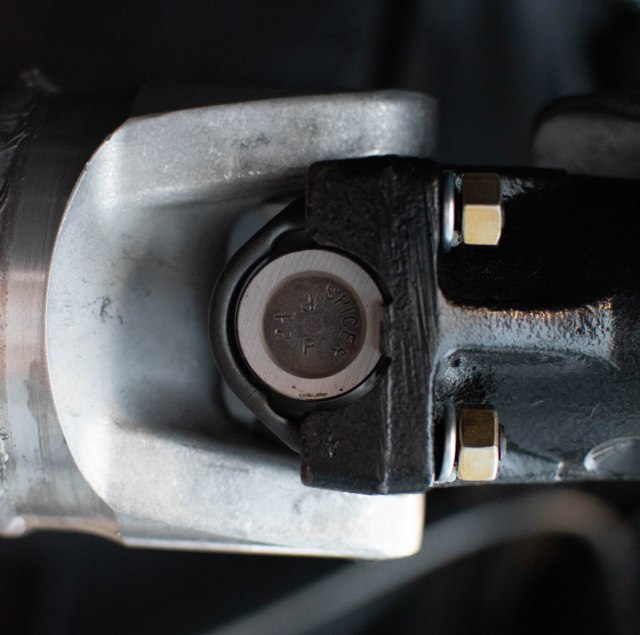 I found a web site with some good information on different universal joints: Universal Joint Identification. From there, I learned that I have a 1310 style u-joint, but the driveshaft came with the standard size caps for the pinion yoke. Mine requires the big caps. The brand that they sent me was Spicer, so I looked up the big cap version at Summit Racing and found part #5-7439x. More waiting for parts.

Fortunately, it only took a few days and the parts were here in time for the weekend. Looking over the new u-joint, it had the same center section, with the same part numbers, so I just swapped the big caps and left the other attached to the driveline. It was in there pretty snug, so I wanted to avoid muscling it out. Swapping them back and forth made me confident that it wouldn’t cause issues and to make the 2 different parts at the factory, they just picked the right caps during assembly.

Tighten everything down, and on to the next thing. I still have to hang the exhaust properly, and decide if I need to stop by the local street rod exhaust shop to get it welded. I am also at the point where I need to put fluid in everything and see if I can get it fired up.  Almost there!