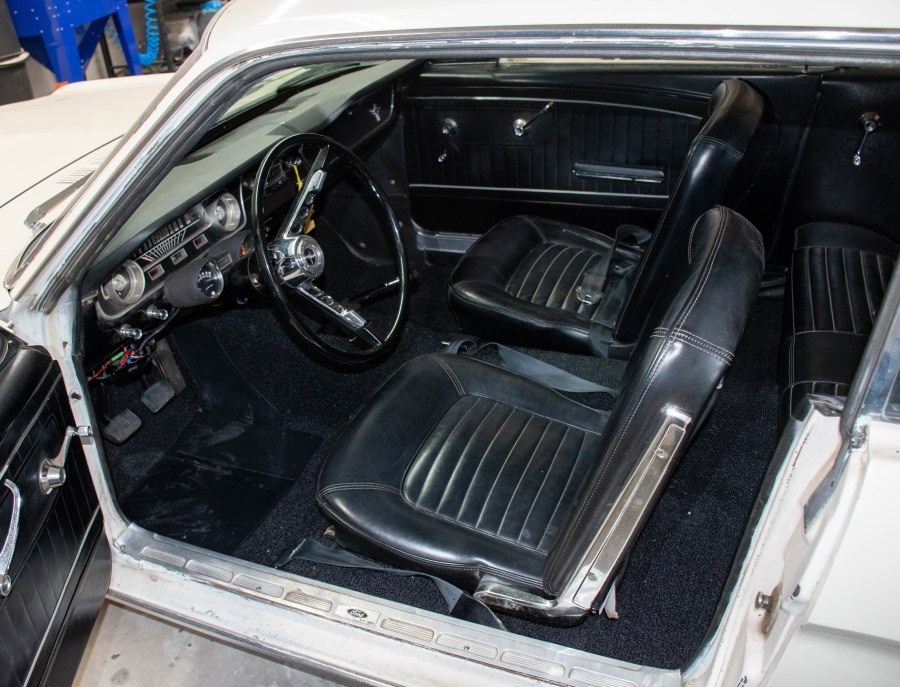 One of the first things I noticed when I first sat in Eric’s mustang was that the carpet looked original. It also reminded me of a 20 year old dog. It was grey on the edges, and amazingly warn out. Having replaced the carpet in my coupe, I figured this would be a pretty easy replace with a big impact on the feel of the car from the driver seat. After having the new carpet sitting in the box for a few months, its time to get it done.

My first few pictures of the starting point were out of focus. I forgot I switched the camera to manual focus and didn’t notice right away. So, after I took out the seats, we get a better view of the carpet anyhow. This is where it started.

A couple of things about this carpet. First, I assume it was original. It’s always hard to tell given the years and multiple owners, but it sure is showing the age to support the theory. Second, I didn’t realize that early 65 had a different carpet than late 65 through however many years that followed. Maybe until 1970? The difference is on the side where the floor transitions to the rocker panel. Early 65 stopped on the horizontal plane, the later design went up the rocker and tucked in under the door sill plate. I didn’t realize this when I ordered the carpet, so I have a late 65 replacement. I could have installed it like a late 65, but that has implications on the fit of the original door sill plates, so I decided to trim the sides to fit like original. Not the best possible solution, but hardly noticeable if you don’t know what you’re looking for.

When removing the carpet, I ran across 4 screws holding it in place where the front and back sections overlap. They are the same screws that were used to attach the kick panels. I am also assuming these are original, so I blasted the face and painted them. Pictures here for the record. A sheet of cardboard is a good way to paint the heads on something like this.

With the back section out, I have a template for where to make the cut outs. I did most of this work with my old tin snips, which I have to imagine are about the same as carpet scissors.

I was amazed at how solid the floor was. Once I took off the back carpet section and the underlayment from under the back seat, I found almost no rust. The original silver paint was evident and clear, with the rest of the underlayment all appearing original. I remember that seat belts became mandatory around the same time as the mustang was released, so back belts were not stock. It looks like someone previously installed after market back belts. They look similar, but are different than the front belts. I didn’t look too close to see how they were fastened, trying to avoid additional projects.

The underlayment in the front was also original and well seated in place. It was brittle with age but very solid. I was tempted to replace it, but then I regained my senses and left it as is. I also left the speaker wires where they were. I am positive someone has been under the carpet previously, but I am pretty sure the carpet itself is original. Notice the threaded rod at the passenger footwell too. That was left under the carpet years ago. It’s important to pay attention to details, people.

Along with the rod and wires, I found 2 pennies, a nickel and a quarter under the carpet. The quarter was from 2002, but it looked like it just slipped off the tunnel and into the seam. The others were under the carpet in the foot wells. The earliest penny was a 67, the others are from 86 and 97. So, not unmolested, but put back together pretty well.

Peeling back the underlayment on the passenger side to inspect the structure of the floor, I saw something I have never seen before. An original floor pan that wasn’t rusted through under the cowl. Someone loved this car and took very good care of it. It was probably garage parked for most of it’s existence.

The little rust that is there is surface rust, and is probably from the past couple of years when it spent some time outside after Eric’s dad passed away. It’s almost like a stain, or dirt that I could probably mostly wipe off. Keeping it inside and with it heading to the desert this year, I am not too worried about it going anywhere.

With the front carpet section out, I now have a template for that too. Not as much to modify here, I just need to make it fit around the heater plenum and the pedals. I did measure and cut an X for the shifter start point as well.

On the bottom, I noticed a stencil with the word Mustang, and a C4Z part number. If it wasn’t original, it was at least an authentic Ford replacement part, but its more likely to be the original.

The back section went in first. I also cleaned up the seat brackets that go between the carpet and the seat rail bolts. They needed a little tuning up with a hammer to get them uniformly flat again. Then I blasted them and painted them semi gloss black for another series of years under the seats. At some point, someone lost the passenger side back pair, but I had a bunch of reproductions in one of the bins. They are slightly different, but they are just as functional.

The back was pretty streigh forward. I used an awl to find the holes, then either the razor, or the tin snips to cut a hole for the seat belt and the seat bolts. The front is harder. Being molded, it’s clear where it needs to be, but with the pedals and shifter in place, its a little harder to get in and trimmed. I started measuring the shifter hole and cutting a small X with a razor. From there, I could widen it the direction I needed to line up the molded shape with the floor.

I rolled the toe side back while I fit the shifter side first. Once I was happy with the back, I started on the passenger side trimming the side then going around front to accommodate the heater plenum. The carpet tucked under the heater box itself without trimming.

With that side in place, I used the awl again to locate the seat holes and used the razor to cut a small square around the hole. Again, I used the awl to locate the 2 screw holed in the floor and screwed the carpet down on the passenger side. From there, I set the seat in place and positioned the 4 brackets between the seat rails and the carpet. Under the car I went to bolt the passenger seat in place, followed by new plugs as the originals were far too hard as 55 year old rubber.

With the passenger side finished, I put the back seat in place and made sure everything fit well in that area also. With everything on the right and back held in place, I moved to the driver side to finish things up.

On the driver side, I moved across from the transmission tunnel, keeping things as close as possible. I had to do some trimming to accommodate the pedals and a cable, then on to the steering column. I did this by rolling it back at the top, marking it and cutting out small sections as I got it to fit. The last piece at the top was the headlight floor switch. Same story there, I rolled it back to the edge, made a small X with the razor and pushed the button through. From there I could trim around it to make a more uniform hole. The last piece was to trim the side to make it an early 65 style.

I finished by replacing the original screws and putting the door sill plate back on. I didn’t actually have to remove it or the door side seat belts to finish the job, but I did. If I used the later style installation, that would have been required.

With the seat back in, this project is done. After sitting it in the first time, I already have dusty footprints on it.

It’s hard to appreciate it without sitting in it and looking around. It feels a lot nicer now though. It still feels like an old car, but it doesn’t feel quite so warn out. Maybe Eric will have a bit more of that feel that his dad had when he was driving it, rather than it feeling like a memory left behind.