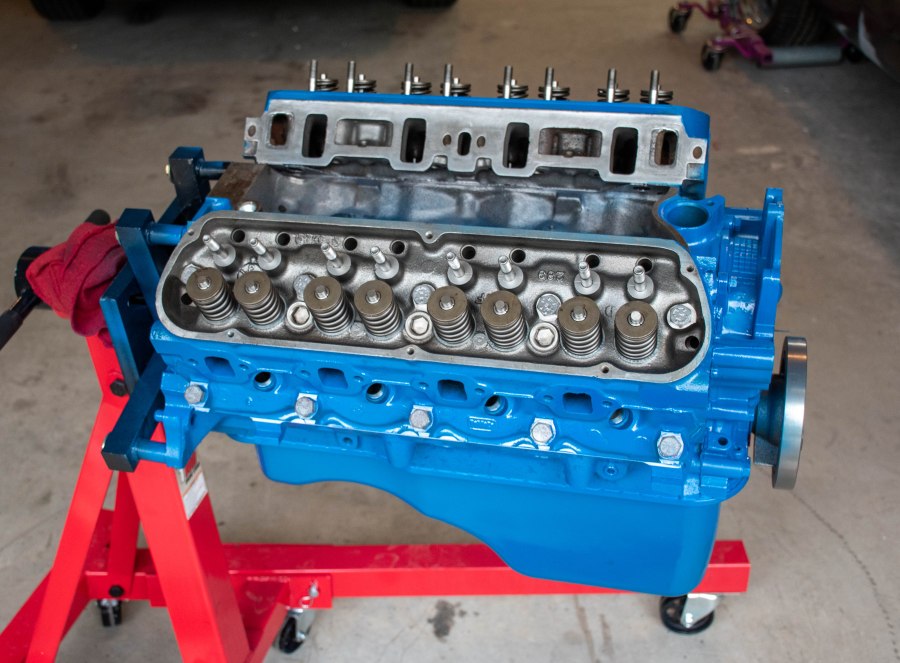 Picking up where I left off with a short block, the next step is to get the heads attached and continue to assemble the front dressing and various accessories.

Starting with the head gasket, they looked nearly symmetrical. The one difference is the holes for the coolant. I didn’t see anything on the gasket saying front, and the book only said make sure front is front, so I had to do some googling to learn which pair of coolant passages should get blocked by the gasket. Unfortunately, I did this after torquing the heads the first time, so I had to take them off again and make sure I did it right. Good thing because I had one backwards. The correct orientation is front passage blocked, rear passage opened.

When I had the block machined, I also had them rebuild these late 67 heads. Everything gets a fresh new start.

Heads are in place, with just one bolt on each side plus the locators on the block. They still have a bit of the original paint in spots, but I want them back to blue so I taped them off and put on some old valve covers to protect the top of the heads from over-spray before painting.

Painted and touched up, ready for the rest of the bolts. I reused the original bolts here. They were not bad, just a bit oil stained for the long ones, and rust capped for the short ones. I blasted each, then coated them with engine oil to delay the inevitable for a bit longer.

Bolts in, and torqued to spec, following the in to out procedure with 3 rounds of increasing torque.

From here, I am putting together what I hope to be my last parts order to include the push rods. Since that puts a hold on the top end, I followed the book and put the water pump on. I ordered new AMK hardware for this, but it seems my replacement pump had one longer bolt that should have been shorter, so I salvaged that one from the tear down pile.

This is the point where I realized I had one of my head gaskets on backwards and took the heads off again. I did more research to ensure I got it right, then followed the torque process to get them locked back down.

Since I am waiting for parts again, I decided to get a few things off the floor. The exhause manifolds were blasted and painted cast iron a few weeks ago, and just sitting in a bin. I picked up a new set of installation hardware and mounted them, hand tight. I opted to use the exhaust manifolds since I did not have the manifolds machined.

The last thing before I leave it for a few days, waiting for parts, was the intake manifold. More of a preview as its just sitting on there over the gaskets. It was sitting on the floor, so I figured this is a fine place for it to sit as well. A little look ahead on how things are going to be looking. Of course before it goes on though, I have to install the lifters, push rods, and rockers. That will probably be a project on it’s own. I don’t remember doing that before, so even if I did, it will be a new experience and education.