Badges? We don’t need no stinking badges! OK, but I do like a little bling, so maybe just a little badging and lettering. I decided to the do hood and trunk letters, as well as the running horse and letters on the side of the front fenders. Since I am not really that committed, I went with the stick on type, not the drilled. It’s hard to drill holes in brand new perfect metal and paint!

To get started, I ordered all the stick ons from Mustang Unlimited. They were the only vendor I found who had all the adhesive versions of the parts I wanted in one place. The letters are heavy and look nice. 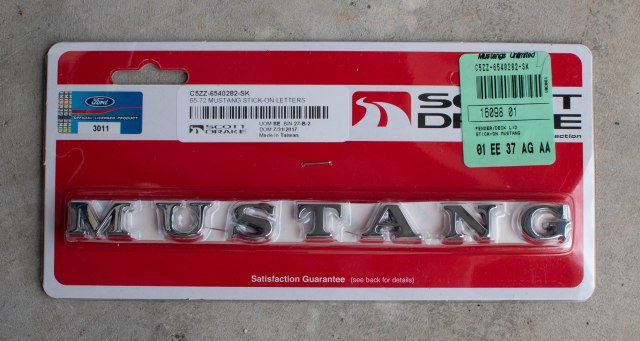 While visiting my restoration shop, Randy mentioned he had several templates for just such these occasions, and lent me his cut off original 68 trunk lid with the holes for the letters as well as the trim. It is just the last 6-8 inches of an original trunk with painters tape across the entire back to protect the paint of the target lid. It had well marked and clean holes to make the transfer easy.

I started with a clean, naked surface.

I used painter’s tape to hold the template in place while I used my silver sharpie pen to put a dot for each drill hole on the original.

From here, I used painters tape again to tape a straight edge across the bottom. I happened to have a sheet rock T-square which is 4 feet long, so I improvised with that. I just made sure it was an equal distance from the top of the back ridge on both sides, and roughly the right height to make the letters cover all the dots.

I gently stuck the letters on starting in the middle and working out. After everything was in place, I stepped back to make sure none were crooked. Looking good, I went through each and pressed them down firmly, making them final. I like the finished product. I think it adds a nice bit of flare to the rear and the chrome goes well with the paint. I think the additional chrome trim around the lower trunk lip is a bit too much, so this is where I will stop and call it final.

Next, I did the hood letters. I didn’t have a template but I did find on the Mustang forums the measurements. Starting on the crown of the ridge on either side, the outside of the F and D are 6 1/2″ in, the O and the R are each 14 7/8″ on the side from their perspective edges. All letters are also 1″ from the lip. I wasn’t worried about being exact as much as uniform, so I did 1″ from the edge of the leading edge trim.

For stick-ons, they mostly look pretty good. The D is a good example of solid work. Even looking real close, it looks good with no effort. 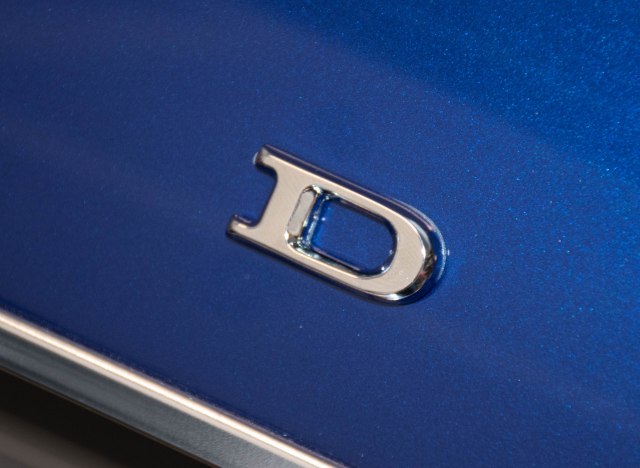 But with the F, the adhesive was slightly off center. I had to do some surgery with a new razor blade and a pick tool to clean it up, but it turned out pretty good for anyone more than a foot from my hood. 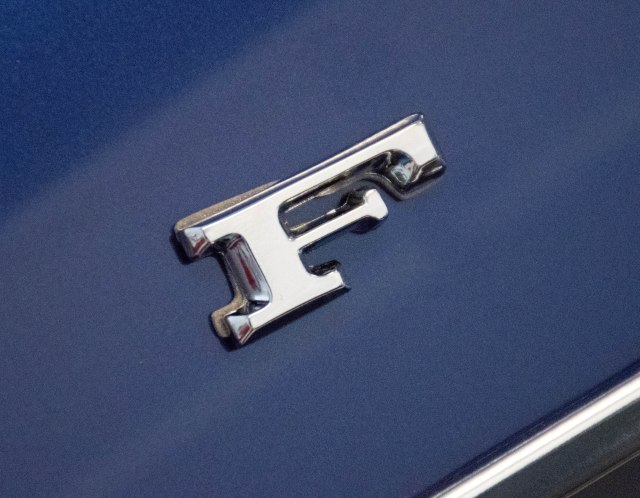 After cleaning it up, I think it looks pretty good. I am liking the bling of the chrome on this blue.

For the fender badge and letters, I found a tech article on CJ Pony Parts which in turn lead to an article on Mustang Monthly. They had a few original samples with specific measurements which was perfect for stick on letters. 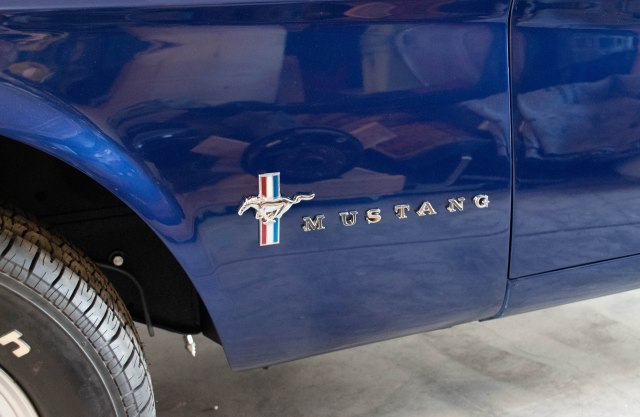 I chose the plain badge for a few reasons. First this is the only tribute to the fact that this was originally a 6 cylinder car. The others had the engine displacement on the top of the stripes. Second, since I have a 302 now, and 302 wasn’t a thing in 67, I didn’t want to put the 68 badge on it. At the same time, I didn’t want the 289 badge, which is also wrong. At the end of the day, the only reason that matters is that this is how I wanted it.  This is a little flare that I think makes it look sharp.

By the end of the left fender, I was down an M and a T. The stickers on those two were so far off I couldn’t use them. I was able to peel them off and the letters themselves are fine, but I don’t look forward to trying to cut the 3M double sided tape to perfection. I will probably just buy another set and hope for the best. It’s worth noting that only one of my MUSTANG letter sets were in the packaging like above, all stuck to a single strip. The other two were loose lettering. The loose lettering had the questionable letter adhesive issues, not the Scott Drake packaged ones. The hood FORD letters were also individually wrapped, and as you see have the same tape issues. All letters were decent quality aside from the tape issue.

Once I get the new letters in, I will finish the passenger side, but that’s all for now.

3 thoughts on “Applying Badges and Letters”