It’s been a long time since I had a steering wheel in the car. The main thing holing me up has been the fact that I need to cut the steering column to accommodate the Borgeson conversion. Well, today I stopped avoiding it and made the cut. I made this post picture heavy since I had a hard time finding pictures of some of the parts as I was learning.

There is a lot of history on this project as its been going on for a while. But today, it started here.

My neighbor lent me his chop saw setup to cut metal. Since I didn’t disassemble things, I couldn’t go back to original measurements. I had to lay things out and do my best. After measuring parts for a good while, I had a mark I was satisfied with and did the cut. This thing cut it like it was wood. Nice and clean with no burs even. Though I still ran a file around the inner and outer diameter of the cut just to be sure.

I was left with this, about 7.5 inches shorter than originally.  That’s the original firewall stopper, but for some reason, the angle isn’t right. I must be missing something. On a side note, as you can see there is snow, so I did this project in the house where it was warm.

First, there is a collar. There is only one way it will go on as the extension about 10 o’clock goes in to the gap in the column.

One part I couldn’t find a replacement for was the small square head bolts which attach the collar to the column.

If you disassemble, don’t lose these. They are small and hard to find. The nut is also a locking nut. Old school, so they appear to be eating the bolt a bit.

They go together like this. You can see the head of the bolt fits in the cutout in the side of the column to hold it all together. Nut is inside the collar, which you will see below. 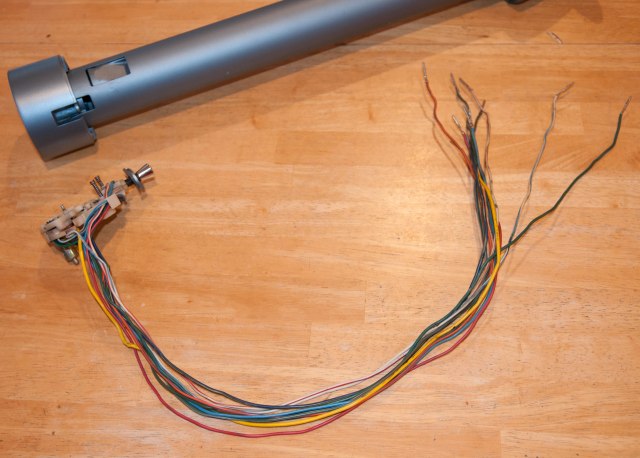 I cleaned up and re-used the original wiring and directional hardware. It looked good, with nothing broken. Last time I used it, it all worked, so I am hoping it still does. I have read several places that the reproduction isn’t awesome, so I am trying to avoid it if possible. I did replace the emergency flasher knob though. The new one is much better as its metal, where the original was chromed plastic.

From here, I had to fish the wires through the collar and into the side of the column. There is a channel built in which lets you not have exposed wires, but keeps them out of the way of the steering shaft as well. The only trick I used was to flatten them out to about 2 tall, the width of the channel. I avoided twisting and crossover purely for space. Another pro tip is to remember to put the cover on before you pull the wires through. You can’t get it on if there are wires coming out of the lower end of the channel. 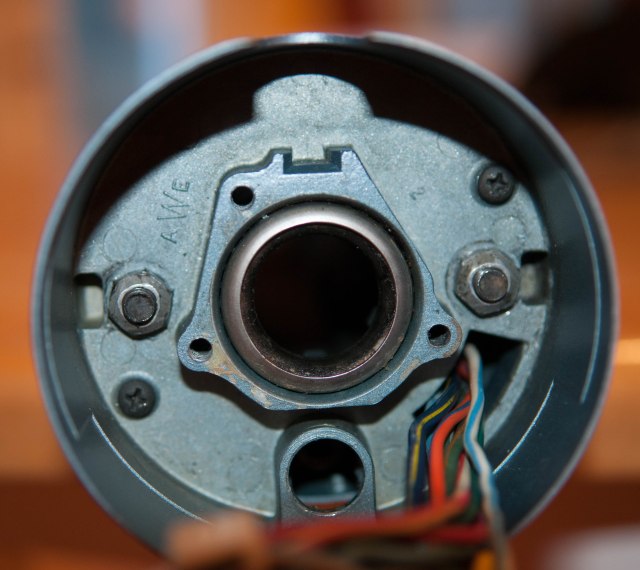 Then I just screwed the cover onto the collar with the 2 screws shown here. You can also see the nuts for the collar retainer bolts and the wires for the switch which just sits on top of all of this.

Another unique part is the upper guide. I didn’t know what I was looking for when I bought this. Once I had it, I recognized the original metal part in one of my bins. I didn’t see a reason to use the original, but it was curious to learn.

With the wiring pulled flush and the switch seated, I was able to put the upper guide in place.

Then came the retainer spring which holds the guide in and applies some pressure to keep it in place and slightly compressed against the steering shaft.

On the lower end of the column, where I made the cut, I added this bearing kit from Mustang Steve. Previously, there was no need as there was no rag joint and the shaft was integral with the steering box, preventing much motion. With a rag joint, there is a need to keep the shaft centered on the column and keeping things locked down. This gets the job done. It also helps address the compression on the wheel against the retainer spring and upper guide.

It goes on the bottom, facing into the tube with a supplied retainer between it and the rag joint at the very bottom of the assembly.

The shaft goes in from the bottom, leaving room for the steering wheel to attach and hold everything in the collar together.

Once all assembled, with the wheel on as well, I compressed it to take up nearly all of the gap, and locked down the retainer on the bearing below. You can see I cut just a bit too much, leaving about a quarter inch more than I would have liked on the shaft exposed.  Looking at the final assembly, it doesn’t seem to matter. Even if I had it pushed right up against the rag joint, I would not have cleared the firewall with the lower part of the column. 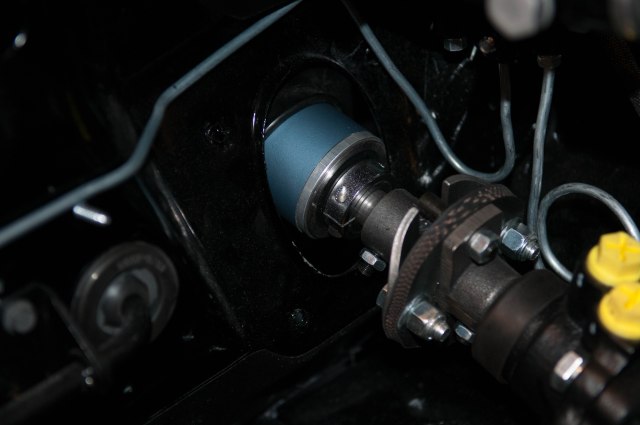 I have seen pictures of shorter Borgeson conversions on other Mustangs. I wonder why my unit is so much longer towards the firewall. It seems like it would make more sense to have it shorter and give the steering column a couple more inches to breach the firewall and enable a good seal.

With the wheel attached and the column in place, I assembled the center ornament and horn “button”. The original was pretty rough with pitted chrome, so I replaced it in bulk. 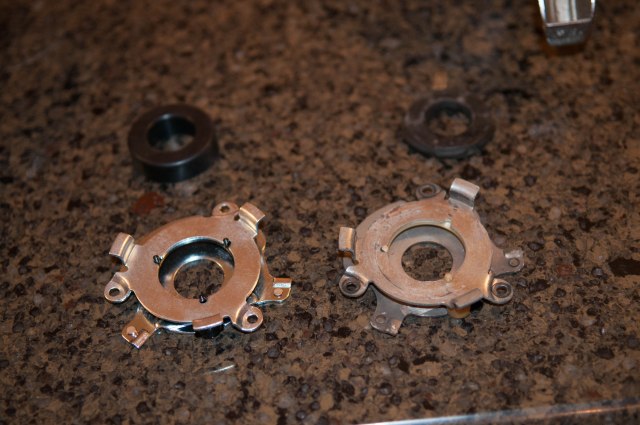 Some broken plastic as well as compressed rubber, no longer holding its original form. Easy enough to address while it’s at this stage.

New chrome and new bling. These parts are much more than I wanted to spend on making the wheel look pretty, but in the end, they sure look nice. Nicer than I have ever seen the car, and ever thought I would. I just wish I could have gotten a better color match on the wheel.

I put it all together to test fit it, and it looks good. I still have to put the firewall seal in place, but I think the one I found is not going to work with the column not going fully into the engine compartment. I have seen others, maybe for collapsible columns, with a flange on the passenger compartment side that looks like it would be an improvement. I may need to hunt one of those down.

Also, this firewall seal kit came with a rubber gasket that was junk. The rubber hole is too small and the rubber is too weak. It tore on first installation. I need to do some looking to see what I can do for a better solution here. Maybe an update in the future.

The other thing I am not happy with here is the color of the wheel. This is the only blue I could get from NPD and it’s the wrong shade.  Once I get things back on the road, my first post driving project is going to be switching out to a wood grain wheel. I should have just started there.

A future small project is going to be connecting the wiring to the AAW connector supplied with the kit and making it pretty, including tucking it away and securing it under the dash.

One thought on “Finishing the Steering Install”