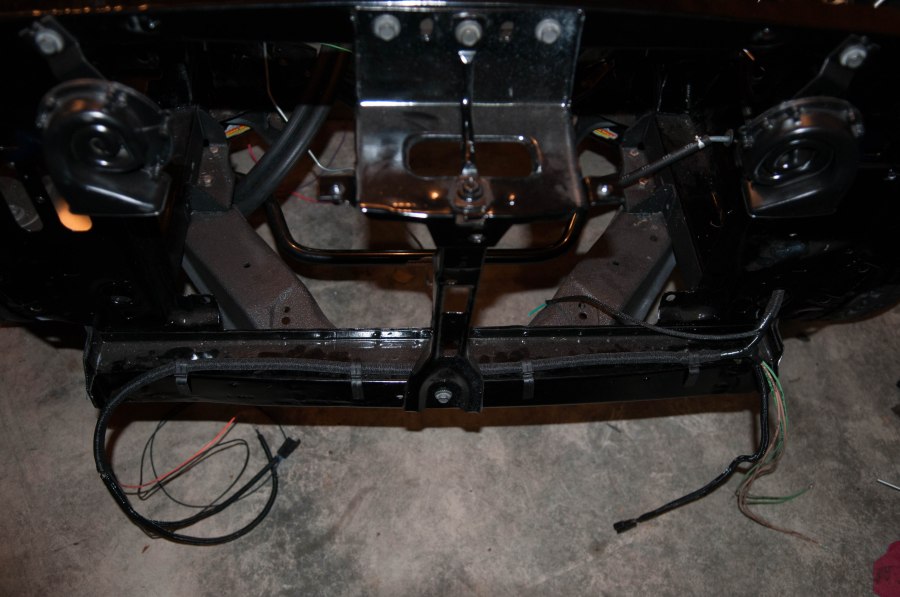 The electrical in front of the firewall took a little more research than the rest. I didn’t have pictures of where everything was before, and on top of that, it wasn’t exactly original, or good when I started.  I got lucky though, Randy had a very similar 67 in his shop recently that has not been restored, still with the original 6 cylinder motor. I was able to take a few reference pictures to get some idea how things should route.

When I started, I had a pretty good idea what most of the firewall holes are for. As mentioned previously, I have the washer fluid hoses in place, and both clusters of wires through the firewall. What I didn’t know was how the wiring was routed from the firewall. I did a lot of searching for pictures, but didn’t find many that were helpful. Fortunately, Randy was working on one that was nearly identical to mine when it came off the line. Early 67 straight 6, un-restored. Below are some of the reference pictures for anyone searching after me. 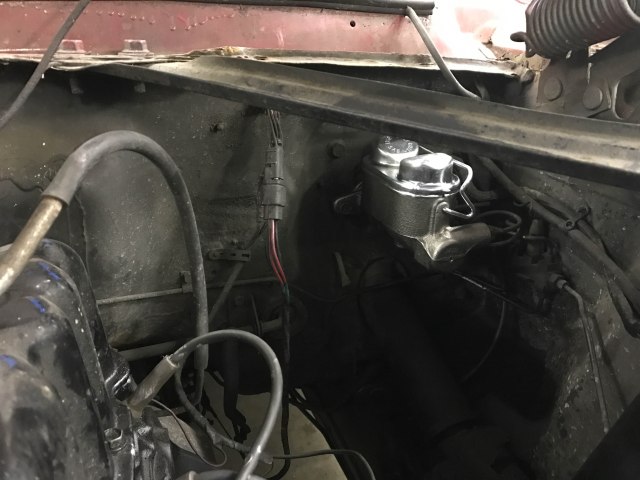 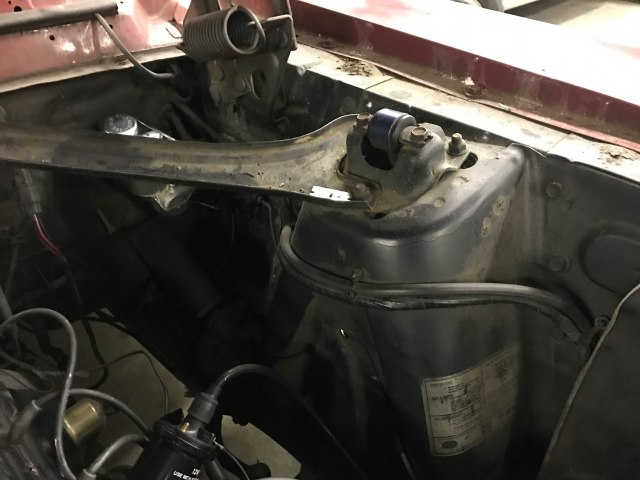 This shows the routing, and placement of the retaining clips. I was a bit at a loss where to start with the big bag of clips for the engine bay wiring, but this helped quite a bit. I was glad to find the proper sized holes in all the shown locations. 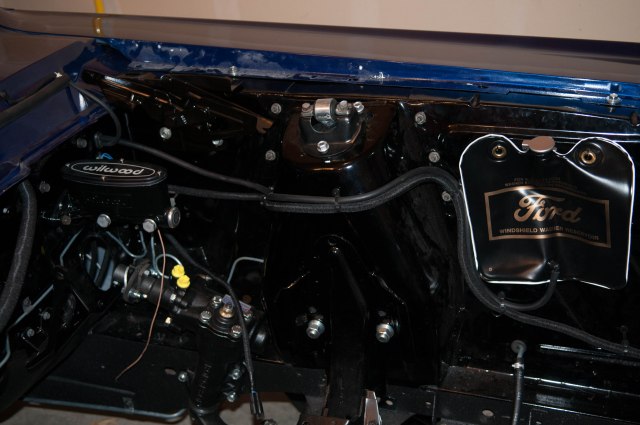 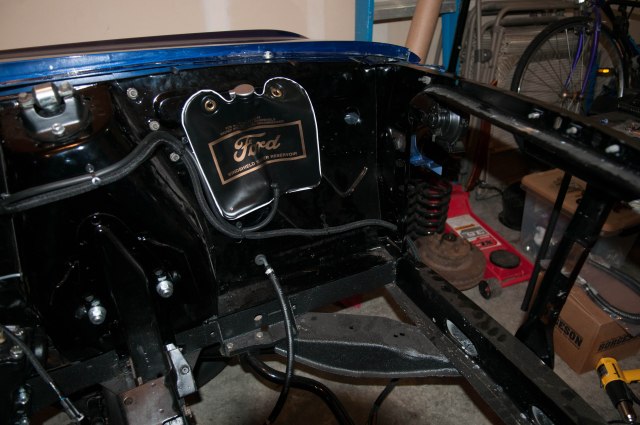 Little victories leading to progress. The next question was headlight and parking light routing. I was looking at an earlier Mustang picture and saw they routed across the top of the radiator frame. That wasn’t the original route for early 67 at least, so I wanted to get more reference pictures.  Unfortunately, this part is hard to see with the sheet metal in place. I was able to reference the previous 68 convertible blog and see some pictures of how he did his wiring. Since he was incrementally restoring, I expect this to be a pretty good reference for my purposes. 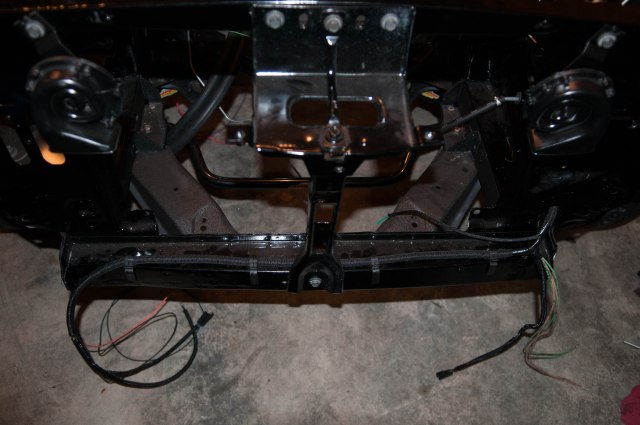 The first thing I figured out was that the 4 clips in the clip kit were for wiring across the lower front radiator support. The bigger issue was trying to get the right wire length for routing to the lights. Unlike the original harness, this one does not terminate at the radiator support with extensions coming in from the lights. 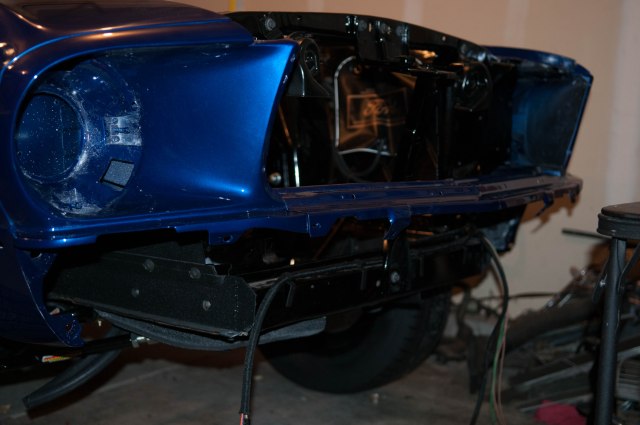 To make sure I had it right, I put the fenders on, including the light buckets and stone guard between them. From there, I was able to approximate where the wires could run and make sure they fit. The main worry is that most lighting wires run from the left to the right rather than direct from the firewall. So the right has double feed (one in, one out) for the connectors. Those also need to reach the light buckets, so without knowing exactly how they route or if there is a pig tail  on any of the lights, I did my best to provide as much room as possible.

One issue I had was with the horns. The wire for the horns is similar to the lights in that it starts on the left and splits off to the right.  But the AAW horn wire is only long enough to reach the left horn. There is a little extra wire, but not enough to cross over to the right by routing down to the lower cross-member. I had to get some extra wire to make up for it. I didn’t really want to confuse things by re-using existing leftovers which are labeled for another purpose, so I bought new wire. I also needed to buy some grounding wire, so another spool of non black wire got added to the list. 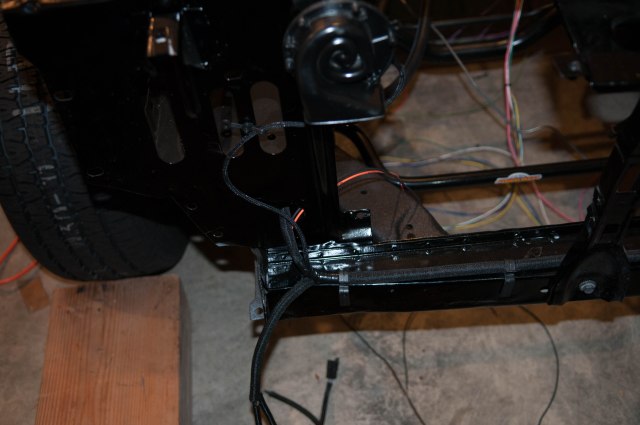 After getting the lighting sorted, I started looking at the other wires coming out of the engine wiring pass-through in the firewall. I found a couple of wires that needed to be routed over to the solenoid. Looking at the original wiring, I found they followed the headlight route, but on the passenger side, came back in and up under the battery tray. This caused me to pull those wires back into the car, out the headlight pass-through and feed them into the wire loom. You can see in the above picture, I now have a bundle feeding back into the engine compartment on the passenger side. Along with the wired horn, you can see a couple of unwrapped wires. The orange is for an electric fan and the black is for fog lights I am going to assume I chose wrong and both will need to be wired from the driver side because I put them on the passenger side. A problem left for a later stage. 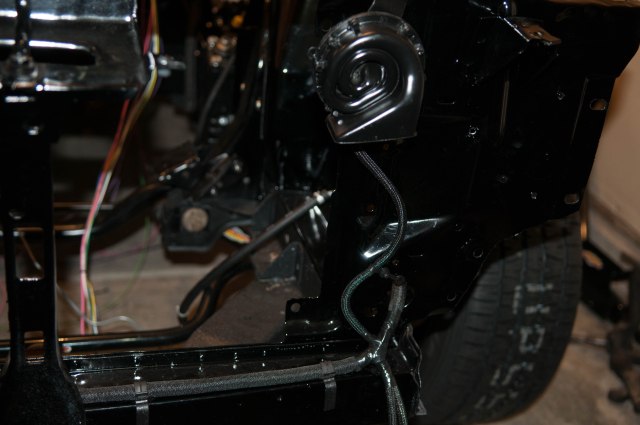 After pulling the new wires, I had to re-wrap the junction. And finish the horn wiring/wrapping, along with the tie down. 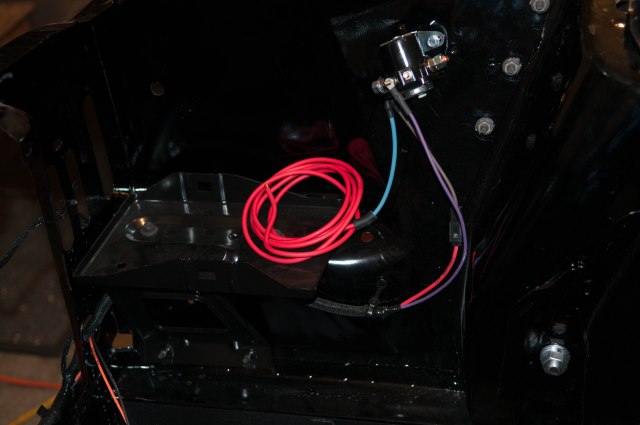 And finally, the battery pan and solenoid area as it stands today. I think I just have engine wiring left. The original wire harness had a push on rubber cap for the smaller terminals on the solenoid. With the AAW harness, they are O style that require a nut to secure it. I recently found some rubber caps for the ends of screws that I think I am going to be using in far too many places. I will probably use those here as well as the fuel sending unit since that has the same change with the new wiring.  Something about looking clean, particularly in the solenoid area which always looks a mess..

Once I get an engine in, I can get the fenders on for good and finalize the front lighting. For now, the wiring is there and everything is where it should be. Always more for another day.