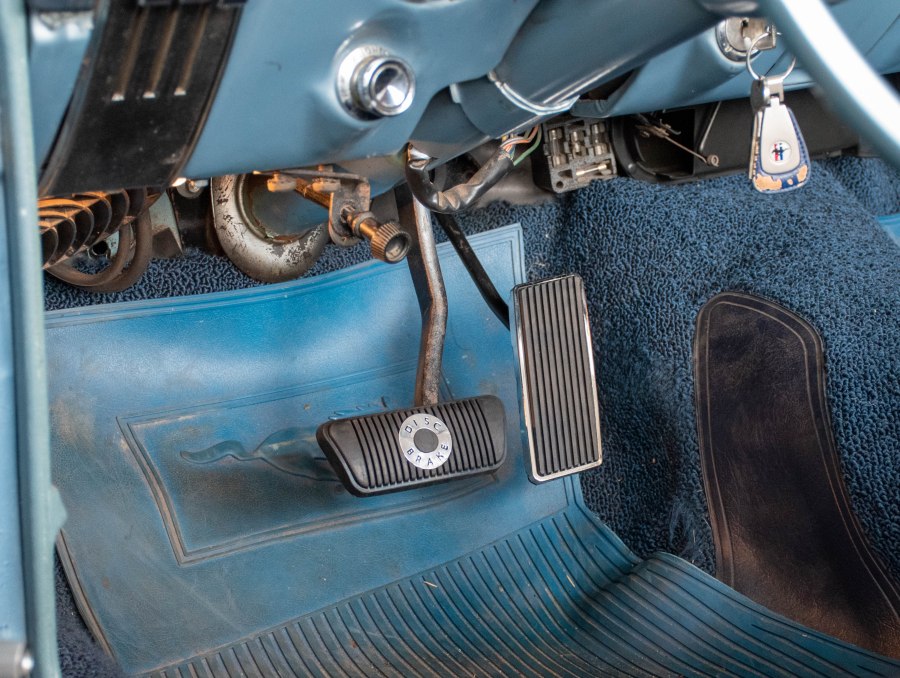 Digging into the convertible, I found a manual choke pull lever under the dash. On the carburetor end, I found a bent cable and a poorly operating choke. Combine this with an early 70’s cable throttle and a jury rigged gas pedal, and I found my next project.

This is my starting point. The gas pedal is on a fulcrum lever with a cable pull at the top. The fulcrum is bolted over the original throttle pedal hole, plus a random piece of sheet metal scrap and a piece of wood. Solid engineering there.

This is my starting point. The stamped codes indicate it is a Holley 2300 500cfm from a decade ending in 9, so at least 10 years old. Ignore the red wire. That is my future choke 12v source, tapped into the keyed black wire to the heater fan. The rest is as I bought it, golf tee and all.

The choke didn’t really work as it was binding and bending the end of the cable. I wanted an electric choke, so I looked up what it would cost to get the right one from Holley, plus a rebuild kit for the 2300 that was on there. The price was approaching the cost of a new 2300 with an electric choke on it out of the box, so I went that route instead.

Step 1 was to install the carburetor with everything else as it was. I wanted to change as few things as possible, and stabilize them after each change.

As I mentioned, I took the 12v off the black wire to the heater blower. It’s keyed, and close by, so makes a good source. Rather than damage the original wire harness, I made a 3 inch wire with a male bullet terminal on one and and a female on the other. I used a clamp on vampire tap to connect the red wire to that, and put it inline for the black wire to the blower.

From there, its connected to the positive on the electric choke. I made a short black wire for the negative terminal and ground it out on the body of the carburetor where the choke is attached. I was surprised the negative wire as not included, but it was easy enough to make.

The throttle cable just came through the firewall above the original air conditioning entry point, above the gas pedal. After disconnecting it at the carburetor and disconnecting it from the pedal assembly, I unbolted it here and pulled it through.

After removing the plates and junk for the pedal, I tested out the rubber fitting as I worked through the order things were going to need to be installed in. Here you can also see the original bolt holes are still available to the left.

It took a little creativity getting the pedal in place with the engine in the bay, but it happened. Making it harder was the kick down lever for the automatic transmission coming off the bottom. I found some of the original bolts in the bin from the coupe and used those for now. I also ordered some new ones since they were cheap and not rusted. I think these may be slightly too long, but work for now.

A little better shot with the kickdown lever. I also put the firewall plug in place from the inside before attaching the pedal.

I attached the pedal and adjusted the linkage to get it as low as possible without impeding the wide open throttle. I also upgraded the brake rubber pad to reflect the disc brake addition.

To wrap it up, I went to O’reilly’s and picked up a throttle return spring kit. Like the coupe, I attached it to the intake and the bottom of the carburetor so any failure of the linkage would not allow the throttle to stay open. I fixed a clip to the carburetor side of the throttle to make things work for now. The original clip doesn’t work on modern carburetors due to the angle of the attachment point. Then I ordered the parts for my heim joint version like on the coupe.

With the air cleaner back on, I took it for a spin. The pedal is now a bit too sensitive, but I get the full throttle now. It doesn’t push back nearly as much as the old cable version did. Over all, it’s a big improvement, but a little getting used to after having to mash the old pedal into the firewall to get it to really move.