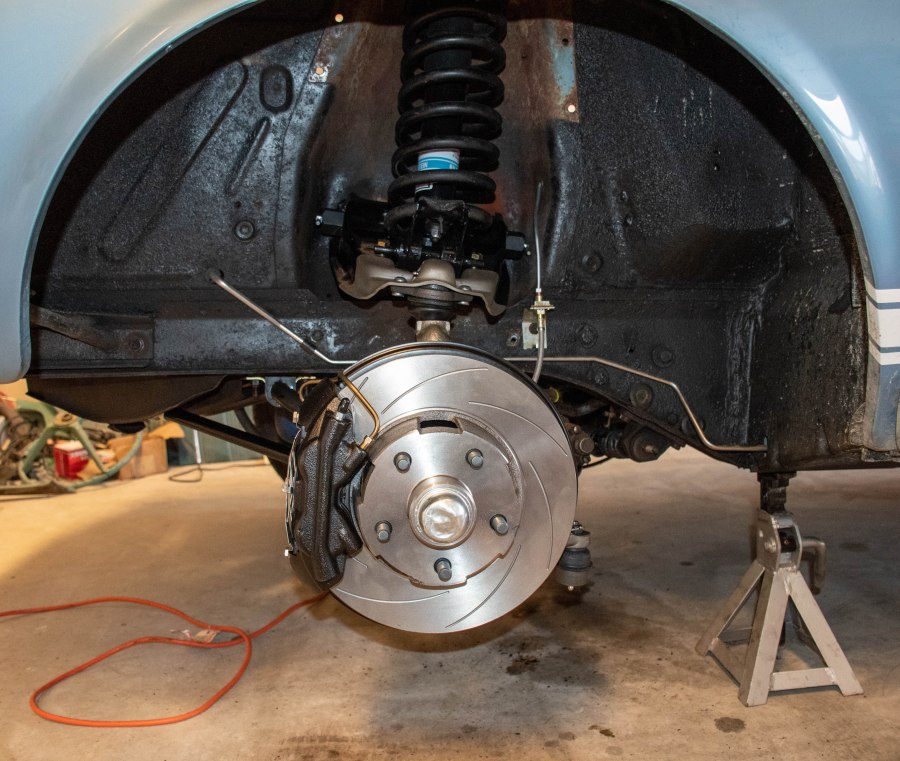 With the spindles loaded with the new brakes, it is time to tear apart the front end and rebuild it with all new parts. I have new upper and lower control arms from OpenTracker Racing, as well as Street or Track adjustable strut arms, and a roller spring perch from OpenTracker. Since I am replacing drum brakes, I will probably have to fabricate some lines as well, so they line up with the new disc demarcation point for the flexible lines.

Might as well lead in with a starting point picture. Wheel height is not bad. New wheels and tires already installed, but Coker Tire didn’t send the center caps, so I will be putting those on with this project. Oh, and scrubbing off the blue from the lettering.

To get started, I jacked it up and supported it on rail by the torque box. I used the jack to take a little pressure off the shock so it wouldn’t explode when I took the bolts out.

Out with the old KYB shocks. At first I was thinking I would have to remove the whole export brace, but once I looked, I realized I could leave it in place. Yay, one less thing to take off.

Because I am removing everything, I chose to use the shock style spring compressor. It bolts in where the shock was, and tightens down from the top. With that in place and holding up the top control arm, I started removing parts. First was the tie rod. It was original, so it didn’t come off easy. The pickle fork is what made the magic happen ultimately.

All the upper parts removed, and it drops out. From here, I pulled the eccentric bolt from the lower control arm and took it away as an assembly. Ready for some new holes for the Arning drop. I bought the template from OpenTracker with the other parts. This is one area I needed help since I could not hold the bolt in the template while tightening the nut on the engine side.

Holes drilled and test fit with the new upper control arm. I probably used 5 different drill bits as I worked my way up from the original pinhole in the template. This picture also reminds me that I needed to replace the bump stop on the outer spring cover. It was also original and very persistent. Ultimately, I just ordered a new spring cover. I will have to do something drastic like drill out the bolt on the old one if its ever coming off. I can put the new ones on next week when they arrive. Not having them in place doesn’t block any progress.

Spring re-compressed by using the detached spring perch. When I compressed it enough to get out of the way, I was able to place the upper control arm and get the perch bolts in their place before tightening anything down. This style spring compressor sometimes adds some binding, so the bolts can be hard to line up if the upper control arm is already bolted to the car. The white plastic thing is just a protective cover for shipping. It comes off.

I hung the spindle from the upper control arm first. It’s heavy so that was a bit of a challenge with my left hand hurt. Placing the lower control arm, I noticed it was not what I thought I ordered. It looks stock, rather than having a joint for the inner connection point to the car. I was committed, so I planned to just use it anyhow. When I went to connect the front strut rod, I found my plans foiled. The lower control arm does not have the 4 holes required for the 67 strut arm to connect to. Looks like this is maybe a 68 lower control arm. I reached out to OpenTracker and they already had the new parts in the mail, to arrive the same day I reached out to them.

New roller lower control arms installed. As easy as installing the eccentric bolt and swinging the arm up to the spindle, then bolting it in. I was sure to get the strut rod in place before locking anything down. I also put the bolts in and nuts on loosely so the strut rod wouldn’t bind up when everything was in place.

At that point, I removed the old brake lines and mounted the new bracket that came with the CSRP kit and put the braided flex line in place. I made sure that there was nothing binding and the rotor would turn all the way from left to right without pulling the brake lines. Since I couldn’t get the line off the distribution block, I had to cut it. I have the parts to make a new one, so add that to the list. It looks like I would have had to anyhow as the drum fitting is smaller than the one that came on the disc line. Good thing I over spent when I did brakes for my coupe, including the Mastercool hydraulic line flaring tool.

New Bilstein shocks installed. After that, the last step was getting the old inner tie rod off. That was a pain, but finally broke free with enough beating on it with the pickle fork. Since it has power steering, I couldn’t get in with my puller as there wasn’t room for anything. I really didn’t want to take the power steering apart.

No good shot of the tie rods installed, but once the old one was out, the new one went on easy. I set them side by side and tried to make the new ones about the same length as the old one so my alignment would start out somewhat close.

I put the center cap in the wheel and washed the blue off the lettering. Now that it’s on the ground and I can get under the hood easier, since I need to replace the master cylinder with one that is disc/drum. I was able to get the left side line off by cutting it and using a socket on the distribution block. The front and back master lines came off with just a line wrench. The CSRP kit comes with new master lines, so I wont have to fabricate those at least. The right side was an issue as well. I had to cut that off at the junction just behind the shock tower, inside the engine bay. I even had to flare the left to right line while in the engine bay and replace the end of that too, not just the short extension that goes through the shock tower. In the end though, good tools paid off.

Just for a starting point, here are the pedals before I did anything. The gas has to be reverted back to stock since it sits too low and doesn’t have good responsiveness. It is a 70 style cable pedal. Not my personal favorite. It is also a lot lower than the stock brake, which is annoying, even with an automatic and no stick shift to hit my knee. When I get back to fixing that later, as part of the carb replacement, I will update on how it goes. For now, I detached the master cylinder from the brake pedal and took it off.

Adding the CSRP proportioning valve was pretty slick, with just new lines, no need to fabricate any fittings on the originals. The down side is that it gets kind of crowded. The soft lines to the master are a nice touch though.

From here, its on to the passenger side suspension and new loaded spindle install. Since it looks the same as the driver, I didn’t take many pictures, just kept working at it.

After that, lines were bled, brakes were bed, and I was about ready to check the initial alignment. I was pretty close when it was all assembled since I paid attention to where things started and tried to get the new parts close to the same settings. After bleeding the brakes, I set the front end down on folded contractor garbage bags so I could adjust the toe to about the same distance on the front and back of the tires with a measuring tape, adjusting the tie rods by hand. The bags make the tires move a lot easier since they are pretty slick.

I was able to drive it to Randy’s for him to align it, and it felt like I had it pretty close. Some day I will get my own alignment tools and do this myself. I should be able to pick it up in time to enjoy the long weekend with the family and the sun.

One thought on “Front Suspension Replacement”