My last major project/purchase for the Mustang is the transmission. I picked up a complete conversion kit from Modern Driveline, who specializes in Mustang conversions. I went with a 5 speed manual T-5 which is mid 90’s technology. The 5th gear is an overdrive which should make it rev lower while driving at freeway speeds, leaving the lower gears for the fun.

The kit contains everything from the bell housing, which bolts to the back of the engine, to the transmission. This includes the mounts, clutch, and clutch activation method of choice from the pedal. I went with a hydraulic clutch system with an internal throw out bearing. This is a switch from what I had been thinking. I wanted to avoid another possible leak location, but it sounds like the cable sometimes gets in the way, and there were some considerations around the pedal, so I went with the hydraulic. It turns out it is pretty straight forward.

The first problem I ran into with the clutch was the location of my brake proportioning valve. On the 67, the Wilwood valve sits right in front of the hole in the firewall for the clutch, if you mount it on the driver side like I did. Fortunately, they sell a kit to also mount it on the passenger side of the brake master cylinder. That caused me to rerun some of the brake lines though, and adjust the others. I wish I would have done the clutch hydraulics when I did the brakes since I ended up taking the whole pedal assembly out to install the clutch master cylinder. 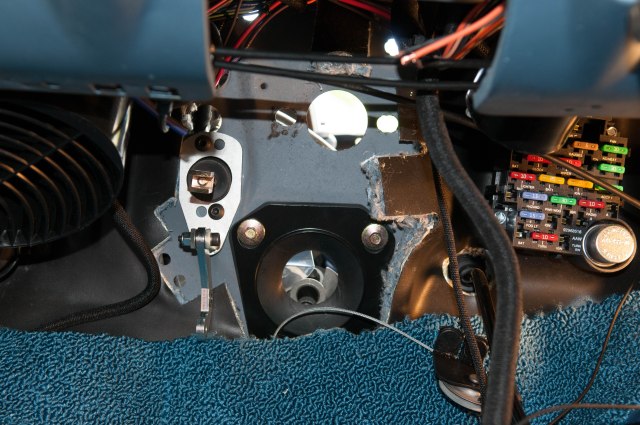 I had to drill a couple of holes for the mounting bracket, so I took out the steering wheel (so much easier with the rag joint), the parking brake, and the pedal assembly. I didn’t have to take the pedal assembly out for the drilling, but I wasn’t able to remove the assist spring with it in place, so the extra room for drilling was handy.

It is a bit tight inside the firewall. The bottom bolt on the clutch bracket is lightly touching the parking brake pulley. I figure it won’t get used enough to cause an issue, but it’s not ideal. I couldn’t move to the right either with the bracket for the steering column.

On the engine side, I had all kinds of new things to play with. When I ordered, MDL sent me a pre-installation document to give me some things to think about. It also gave me a good idea of what I need to pay attention to, and key parts not to leave out. That got me worrying about the crank bearing and if I would have to find one, but when the clutch arrived, it was included. The clutch assembly arrived a day later than the rest, so I got started with the flywheel.

First, a test fit of the bolts and the backing plate. Everything fits perfect.

The videos I found showing a T-5 conversion each had a flywheel where you needed to hammer in the 3 pins for the clutch housing. This one came with it, which is nice. I was worried about putting it on right, but it only goes one way. The bolt hols are spaced in a way that you can’t install it wrong.

When the clutch assembly arrived, I seated the inner bearing. It was tight and the technique I found had me using a small hammer and a socket to protect the face of the bearing. Lots of tapping around the socket to slowly seat it until it was flush. I then greased it with some of the bearing grease I had from the front brakes.

Yep, clutch bolts all go in smooth also. I am being a bit paranoid to make sure everything goes well since I don’t want to do any of this again once it’s in the car. 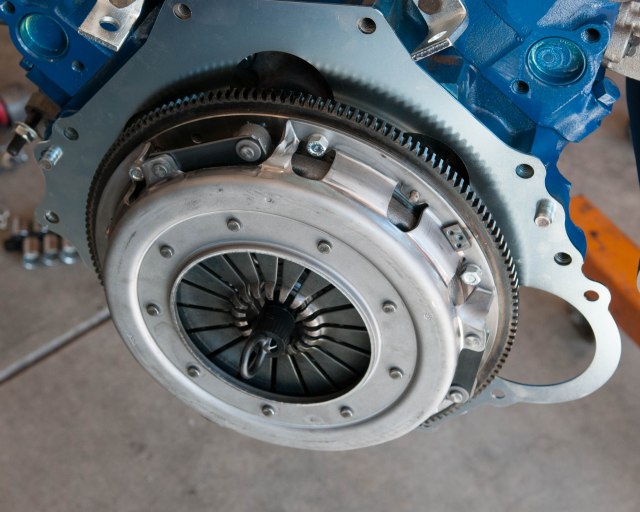 I placed the plastic retainer plug through the clutch plate to seat it in the bearing and hold it in place while I set the clutch housing in place and bolted it in. Following the directions here made this go very smooth. Go figure. 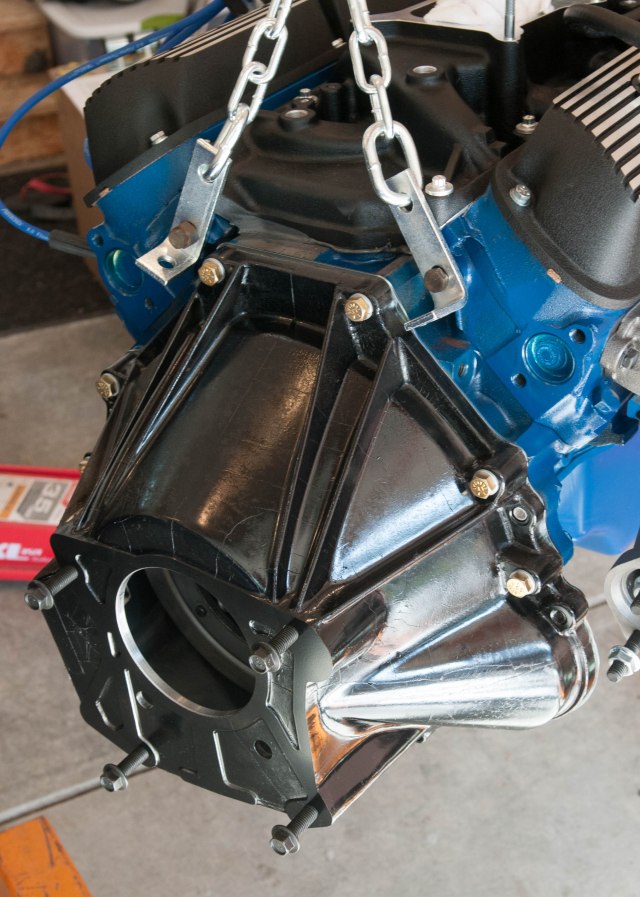 The aesthetics committee decided the bell housing should be black. It shows the casting imperfections on the aluminium a lot more than the unpainted, but I don’t expect to be able to actually see it again. I have to agree that black does look better with the color scheme on the engine.

From there, I decided to put the engine in the car and mount the transmission itself from the bottom. I didn’t want to attempt the acrobatics of mounting the transmission  first, then dropping the whole thing in the car with my meager garage and tools. I will have to follow up on part two for that.