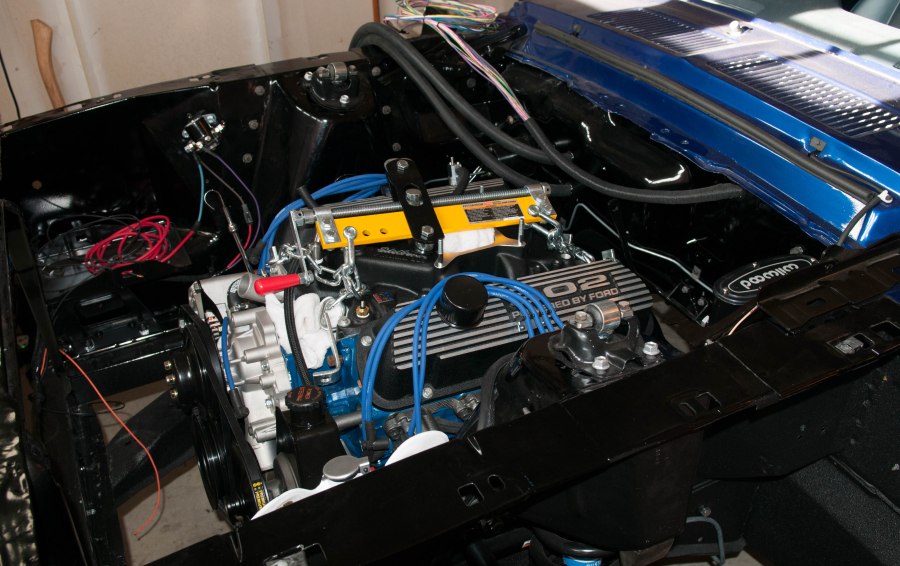 It seems like I have been all over the board the past couple of weeks. Mostly, I have been trying to get the engine in the car. There have been a few side projects that have come up, needing resolution before I could get there, but I finally did. It may not be final, but it’s nice to see a picture of it mounted. It’s been 20 years since this car has had an engine, so this is fairly momentous.

Getting started with the mounts, I though I did my research correctly when I first cleaned them up and painted them. It appears I was backwards.  The 67 had a unique mount plate which is not reproduced, causing fitment issues with available mounts.  I didn’t think to compare my new mounts to my original, warn mounts until after they didn’t fit.

These are my original mounting plates. Research indicates I want the ones where the right hole is parallel to the edge with the left hole. These put the angle wrong. I thought it was the other way around and these were the common ones. Test fitting the first try revealed my mistake.

Another clue was only the right side had a side indicator, with the “R” you can see here. The left side does not have an “L”.

From here, I had to choose to either buy the 68 version and they will probably work, but there is no room for adjusting. Or I could buy the Ron Morris adjustable mounts which also have a half inch drop and can move left/right and front/back.  They are pretty spendy in comparison, but I went that route for maximum fitment with all of my non standard features.

Unlike the original parts, these come in a pile of small parts. The assembly is a key part of why they are so adjustable. They are also made of some seriously thick steel compared to the originals.

Getting things setup left the connection point floating. The plate was torqued to spec on the motor. I didn’t see a clear indication in the instructions on which direction the tapered side went, but I couldn’t see a scenario where I would want to bring the motor forward vs backwards, so I mounted it with the taper back, allowing for the motor to be adjusted to the rear.

In comparison, here is a shot with the original mount when I was trying to figure out fitting issues. 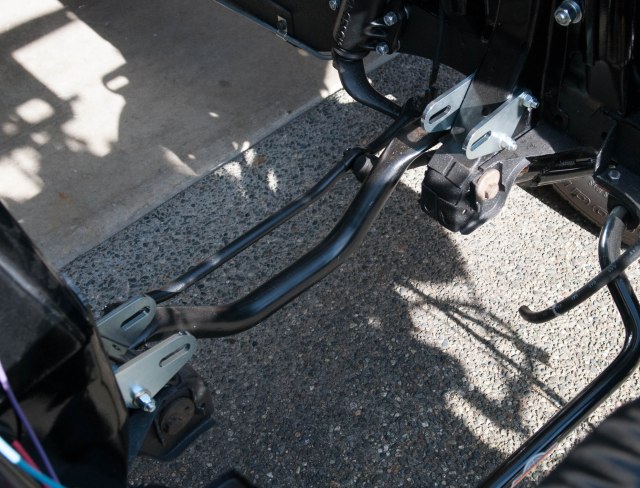 From here you can see the difference in design. The mounting plates are just bolted to the sides of the shock tower mount location. The slots allow for left and right adjusting of the motor final resting location. The above round parts on the engine side just drop in between the plates and a big bolt goes through, holding it all together. Another nice feature there is that the engine is bolted to the frame. The original mount holds the engine on with a big block of rubber.

The next problem I created was the cross member. With the half inch drop, the oil pan is now either on the cross member, or a hair’s width off it. To solve this, I ordered a custom fit cross member based on the Boss 302 design and made to fit with my RM drop motor mounts. More on that later when it arrives. 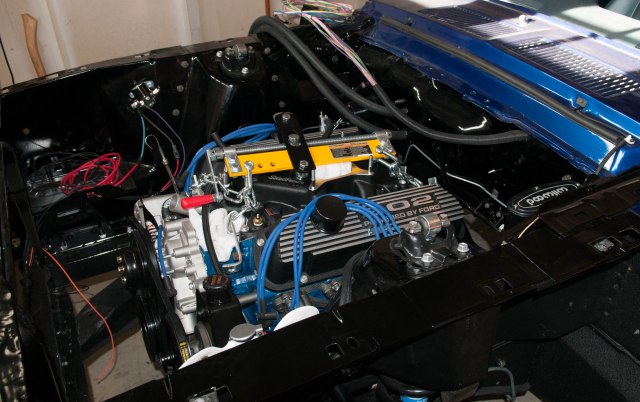 In the end, it’s in the car, under it’s own weight. Here, I have the bell housing mounted with the clutch and flywheel, but nothing behind that. I plan on mounting the transmission from the bottom in the coming days.  I created another project for myself by going with a hydraulic clutch, which caused all kinds of consternation. The things I learn about what I should have done as an earlier project.