As these projects go, once I can get the top most dependency done, things just start falling into place.  The interior is waiting on the carpeting. Carpeting is waiting on the sound deadener and padding. This week, that came in so I got to work.

The gray primer isn’t a bad look. compared to where I started 2 years ago. Remember light was coming through the floor because it was so rotted out. That may be a street sign for the back floor too. No need for the drain caps since there was nothing to attach them to.

Moving on, I liked the sound reduction of the Dynamat in the roof. If I tap on it, as a large open metal sheet, it makes a dull thump with not much sound. In comparison, if I tap on the quarter panel, it is much louder, like the top of a barrel. Just from this stage, I’m sold on the sound deadener. So I got the pre-cut kit and went to work. It was pretty easy, but I did make one mistake and let the sticky side fold and touch. Just write it off, because it’s never coming apart.

Being new to the underlayment in a classic mustang, or a car in general, I wasn’t sure if some of the options were exclusive or if they would all work together and add value. I ordered a mass back ACC carpet a while back. I also decided to order the mass back padding, particularly for areas that wont have carpet yet. I worry about the harmonics coming from the fuel tank. Which reminds me I still need to get the divider to the trunk. Maybe I should Dynamat that too. At some point I will get some sort of carpet or covering for the trunk, so I just got the padding with the rest. 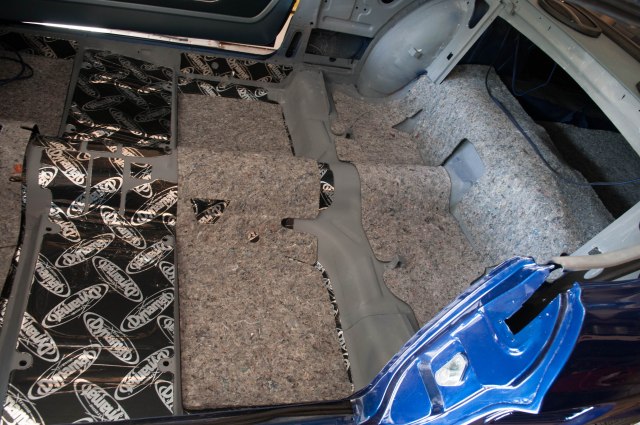 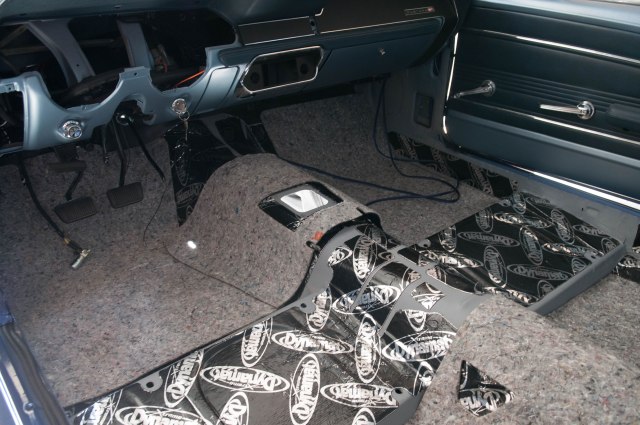 I really liked this padding. It has a heavy black material on the bottom which holds in in place well and forms to the floor a bit. When I unwrapped it, I used my heat gun to warm it up and place it. It didn’t take long for it to get tacky and pliable.  I noticed it is similar material to what is on the carpet itself. In some places, the carpet padding was falling off, so I cut it off the back section and see how that changed the fit. It actually made it worse as the foot wells may be deeper than the carpet is molded. So I placed the cut off pieces where they belonged on the floor and it fits pretty good. I also got some 7/16-20 bolts at the local hardware store, plus washers, and locked things down where the seat belts go. I still have to figure out my plan for seat belts. The bolts help lock things in place as I was stretching the carpet, trying to get it to fill the floor and not lift up while I was fitting. 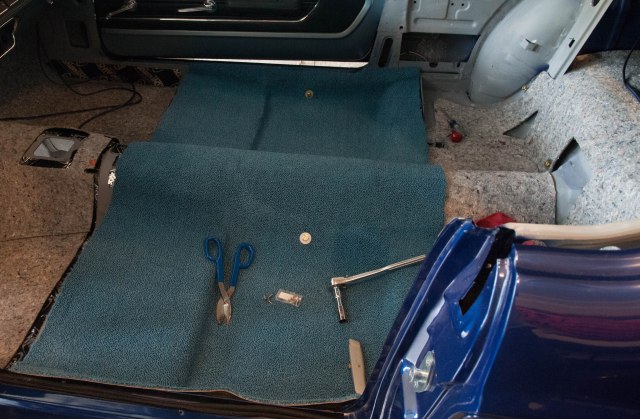 The CJ video I found was installing the carpet on a convertible, and I’m not sure what year. It was slightly different around the rear quarter area and the rockers. What I ended up doing was just cut so the sides were lined up with the ridge on the rocker. The rocker cover fit good that way and pulled everything into place. The quarter window panels will cover the excess side carpet as well. For the back, I just trimmed a very small bit so that it lined up with the ridge under the seat. The back went in pretty easy.

I did have to finally deal with drilling holes to mount my dimmer switch. Something about drilling holes in parts I spent a lot of time to make perfect again. I have been avoiding mounting it, but I couldn’t avoid it any longer. I had to cut out a section of the carpet for it also. The carpet came with a grommet to let it poke through the floor and still protect the carpet from ware. 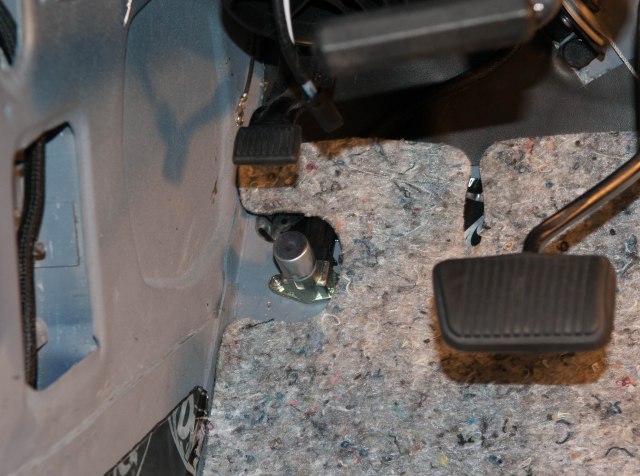 Things got moving, so I didn’t get a lot of pictures installing the front. My main trouble was trimming under the dash. I saw a recommendation to align the back of the front section on the seat riser/foot well contour, and fold the front over and work it forward until you can tell how much needs to be trimmed. That technique worked well, but it was difficult to cut just right around all of the stuff where the firewall meets the dash and the various parts.

When it came to cutting holes for the front seats, I used the awl (must have tool for this job) to find the holes, then just cut small squares. I put the driver seat in to hold both carpet sections in place while I went to work on the passenger side.

And they look pretty good installed too. I have a few screws left to fit. I ordered the wrong kit and had half as many as I needed. They even have a little ford sticker you can put on to make them just like the originals.

Once I finished both side, I had to put the quarter window covers back on and put all the seats in. I also put the steering wheel back in so everything that was done was back on the car. I am still waiting for the quarter windows, but at least I have ordered them. Still looking for a good driver window and frame. They seem to be on back order everywhere. I may have to start looking for a good original. 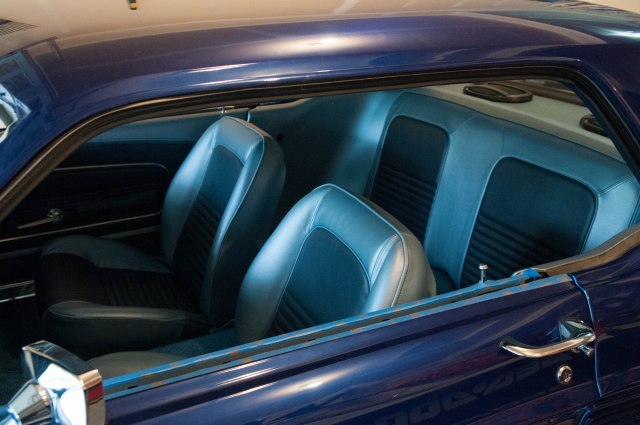 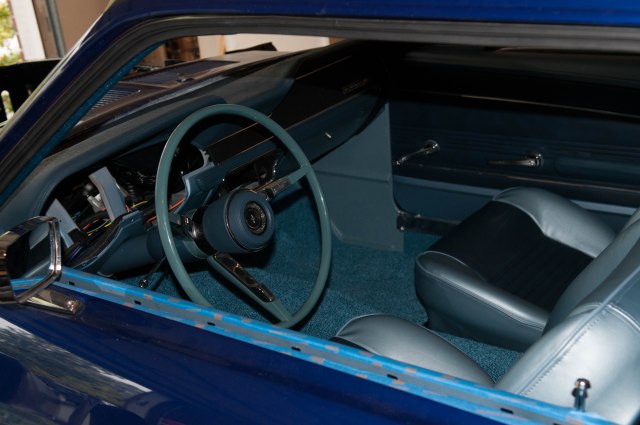 For interior, I just need to get the glass installed in the quarters and door so I can put those back together. There is also the front windshield and the instrument cluster as well. A couple of more involved projects I need to tackle soon.