I thought I would put the engine assembly all in one place, even though I have other posts engine related. This is mostly a photo shoot showing it go together.

When I brought it home, it was kind of ugly. 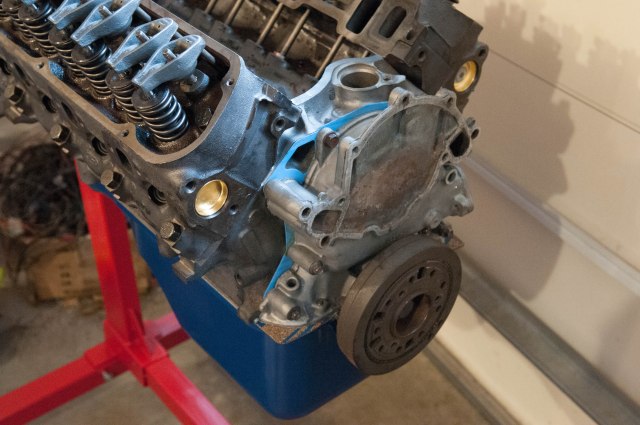 I cleaned it up, mostly just degreasing the appropriate parts and trimming the extra gaskets that were hanging out. I then added some paint in the form of auto parts store engine enamel in a rattle can. Not the best, but a definite improvement.  I went back and forth about painting the harmonic balancer, but in the end, I didn’t. It is going to be mostly obscured by all of the things above it anyhow. 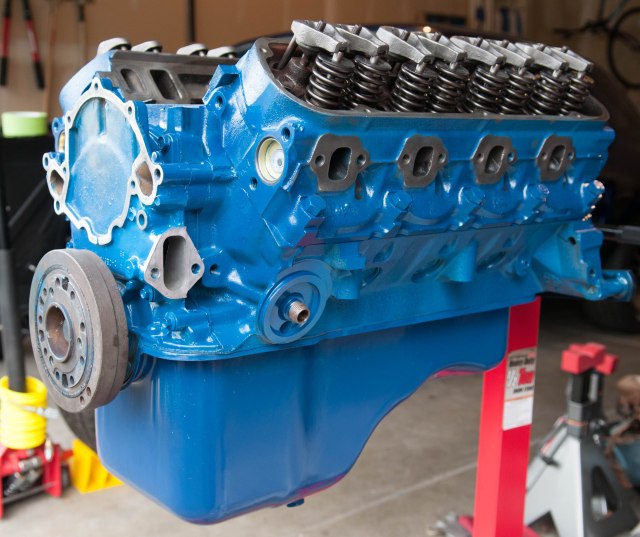 I started by adding big parts to cover holes where things could get in. Intake manifold, exhaust manifold, and valve covers. The mounting hardware for the valve covers was not available from the same store, so I had to wait on those till later. I went with some dressy valve covers I liked, an Edelbrock 2121 intake manifold with a black powder coating, and HiPo 289 exhaust manifolds. Also, I noticed I missed painting the edge of the heads where the intake manifold meets up. With the two black components, I needed that blue in there to have good lines, so I masked it off and did a quick spray to fix that before the manifold or covers were installed.

From there, I added a Carter mechanical fuel pump and a FlowKooler performance water pump. I see some people paint the water pump, but I thought it looked good with the aluminum satin finish, along with the natural look on the fuel pump. 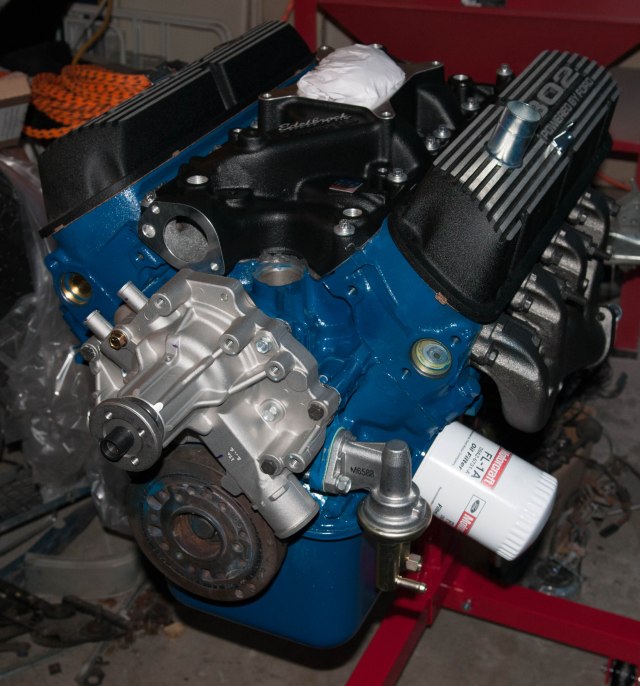 Next, I remembered I had the power steering pump from the Borgeson conversion tucked away in a corner. It was finally time to unbox that and bolt it on. I had some initial worries here when it wasn’t fitting. I defaulted to the wrong bracket holes and the bracket was hitting the fuel pump top. Eventually I actually looked at what I was doing and realized I should be using the other hole in the bracket and it went together fine. 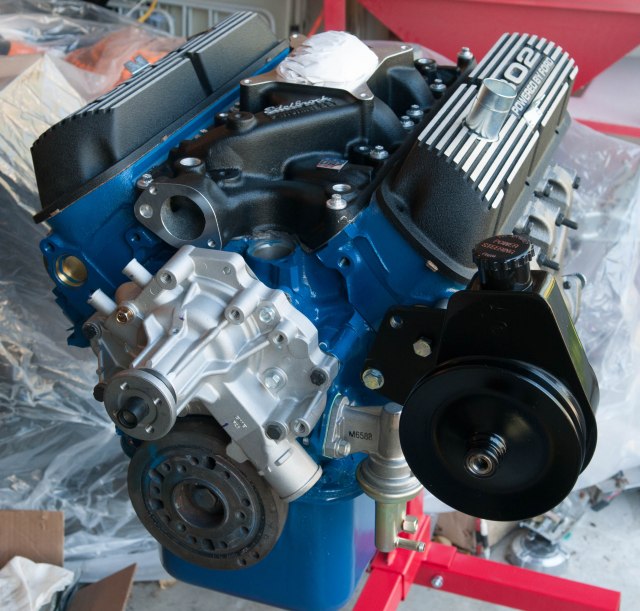 Up next was the thermostat housing. The parts are getting smaller as its time to start looking into the details. Along with that order came the carb spacer. I mean, why not? I had some other small parts with it as well, but they were delayed.

I had an issue with the first thermostat housing. The thermostat must have slipped out of the grove. When I was tightening the bolt, I heard a crack.

The trick I saw on someones video was to use a touch of the gasket sealer to hold it in place. After replacing it, that went much better. Cheap part, just had to wait for it. Again. I was pleasantly surprised that the carb spacer came with studs. The benefit of not ordering everything at once. Those were on the shopping list. Simple install. Hardware in place so I don’t lose it before the carb arrives.

Next on the list was the alternator and pulleys, along with assorted little things I ran across along the way. It’s taking some research to figure out what all the holes are on top of the intake, but one by one I am building the parts list.

One step forward: The alternator came in and I learned something about mounting brackets. Two steps back: I have the wrong bracket, I didn’t buy the install kit with the spacer.  Spacer is ordered. Because I have a 72+ timing chain cover, I need a different mounting bracket. The lower arm which is the tensioner is not curved enough. I ordered an original used part. Lets see how that does when it arrives.

On the up side, I also got the pulleys in. I found the bolt set for the bottom one. The top, water pump pulley still needs bolts. I need to decide if I am going to add a fan with a clutch, or go with an electric fan. Pulleys are expensive for as simple as they are!

Next came the fuel line. I ordered a stock unit, thinking that I can get it routed up to the top of the engine in a solid mode, then go rubber line from there. Well, the carburetor came with a free 90 degree elbow with a fuel filter with a hard line fitting.  It doesn’t line up with the hard line. I reconsidered and ordered a flexible line with a hard fitting on each end. Let’s see how that works out.

I also picked up the oil pressure sending unit and the extension neck to get it out away from the block. I tried to find something more modern and smaller, but this is all I could find. It’s just not pretty.

I also got a distributor. Since I didn’t realize the fuel pump rod was not there, I didn’t order one. That’s also coming in the next care package. For now, the distributor is just dropped in. I am going to have to figure out how to set it up correctly too, considering I had no previous distributor to copy for setting the rotation. I am still hunting for the vacuum advance hose.

Next on the list is the carburetor. I stuck with the theme here. It came with a nice DVD to show me how to install it, and what all the pieces/parts are for. Unfortunately, they put the PCV valve input on the front. That blows my stock tube plan. The distributor vacuum advance also comes off the front, which is convenient. I do like that fuel elbow and filter that it came with as well.

In a moment of weakness, I picked up an over engineered (for my purposes) adjustable PCV valve. A little bit of hose from the local auto parts store later and its in place and ready. I hope the default setup is at least good enough to get it fired up without messing with it.

On the small victories front, I picked up a reproduction cooling bypass hose. Some clamps from the local auto parts store and it’s done. I probably could have gone cheaper, but the custom bend reduces the possibility of a crimp. The things I tell myself to justify all the parts that I buy. I also got the valve cover hardware and installed that. Can’t forget those details.

As I put in the spark plug wires, I notice another mistake. I ordered the wrong distributor cap for these wires. They are female to female. I need a male cap to make these things work. At this point, the cap is cheaper than wires, so it’s on the way.  At some point, the flood of parts and re-parts will be over. I hope it’s running when that day comes.