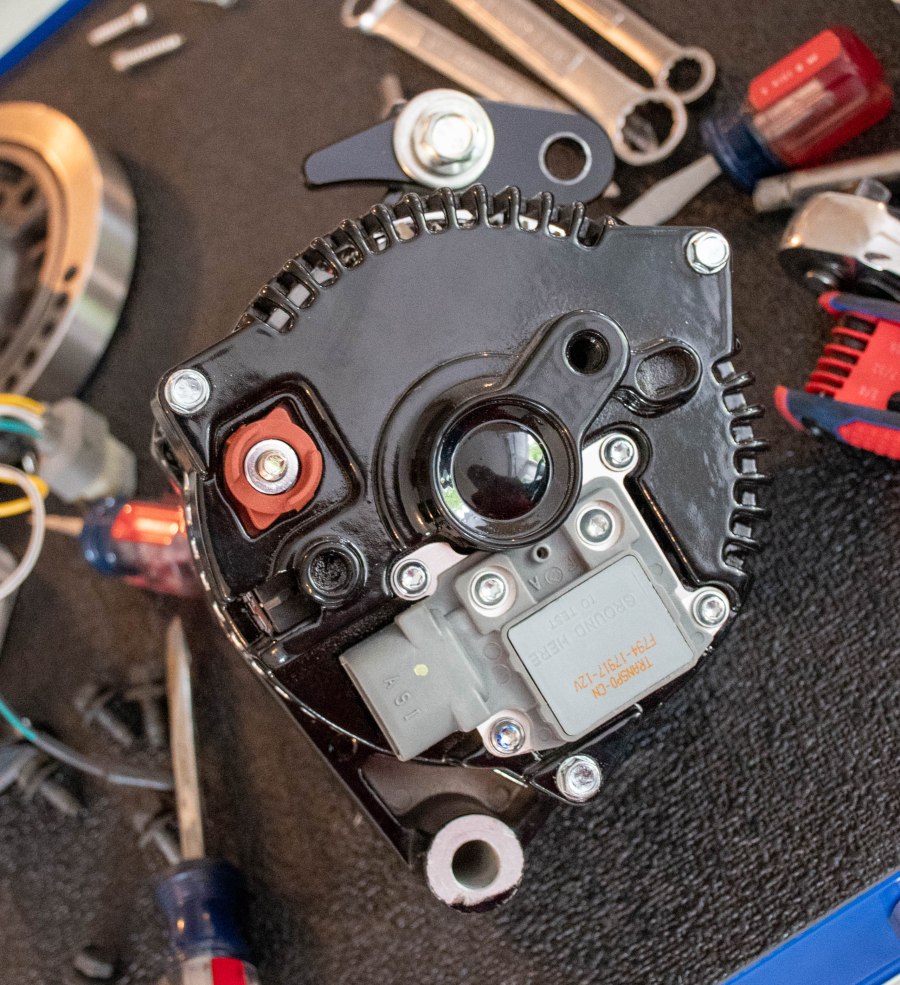 This week I learned that reclocking an alternator is a thing. It solved a long standing problem I have had and have been worried about since I put the 3G in the coupe. Evidently, its a simple procedure to change the orientation of the terminals on the back vs the mount points on the front. The more you know.

When I installed the 3G originally, I was concerned how close the positive terminal was to the block. Since the block is grounded, this left a very small air gap to keep my car from shorting out, and probably catching fire as the battery exploded. I thought I needed a find a rubber boot to cover it as my only option. Then I saw someone post an article on installing a 3G, and referencing reclocking it. You can find the article here.

So, I took my alternator out. This is how it came from PA Performance, and evidently from Ford originally.

The clock is based on the square tab on the top being at 12 o’clock, following the article’s vernacular. The square bracket is on the bottom when I mount it, so with this side facing the engine, you can see the red terminal where the battery attaches is right against the head. It also puts all the other wires on the inboard side, facing the water pump. Not a big deal since that keeps them out of the way, and honestly, probably more ideal, but everything rides on the big red wire.

To reclock it, I had to first take the 3 bolts out holding the case together. Then use my favorite tool, the battery powered Dewalt impact wrench, to remove the pulley nut and pulley. Next I could tap the attach points with the alternator standing on it’s shaft, until the case separated. With it separated, I just turned it to have the positive terminal at about 9 o’clock and closed it back up, putting everything back together like it came apart.

With it oriented this way, to install it, it just rolls way, so the bottom attaches to the top, and the positive terminal is as far from the block as possible. A couple of bolts and some choice words as I cram my hands into the tight space around the alternator/fan/battery/radiator, and it’s back together.

One more thing I did while in there was the ground. I also neglected that last time. I got a grounding strap from the pile of old parts and attached it to the back of the alternator frame, and connected it to the block ground point just below the alternator.

Here it is finished. You can just barely see the red wire, a couple inches outside of the block and away from everything. The other wires also look a little more unsightly now, but functional and safe. The car fires up, and the battery tests out when running just under 14 volts, so it’s charging.

I hate going back and redoing things, but missing knowledge up front for a conversion project like this makes it unavoidable. Wish I knew it earlier, but its good to get it figured out and installed correctly now.

One thought on “Reclocking the Alternator”