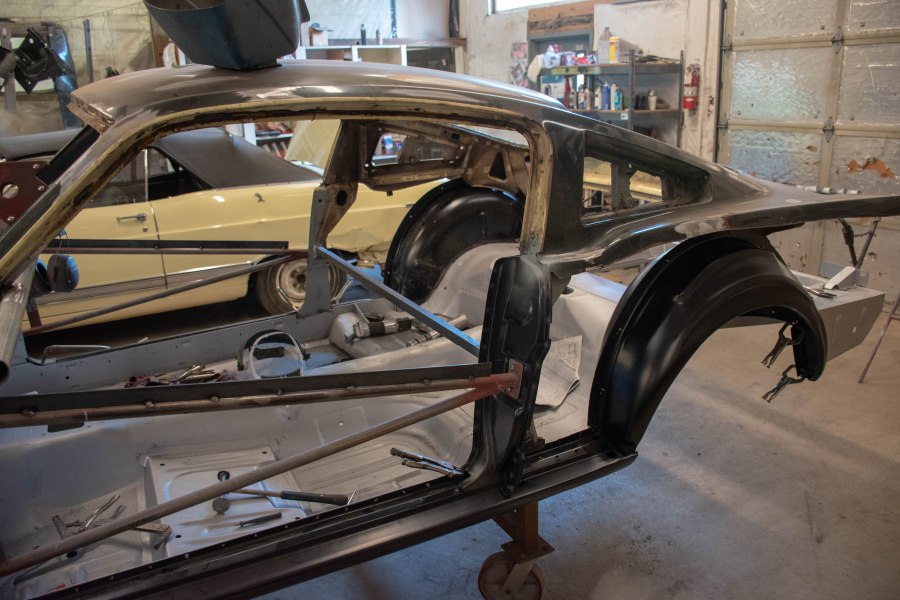 Most of the sheet metal removal is done at this point, and a good bit of work has been done to re-assemble a fresh body. It seems a new surprise was around every corner, but in the end, I guess I will have a brand new 65 fastback with zero rust. It just won’t have much sheet metal from 1965.

Continuing to build up from the new floor, the new quarters and tail light panel are test fit. The outer wheel wells are looking like they are going to be an issue, but the other parts are fitting pretty good.

When I ordered the wheel wells, I though I would get the heaver guage steel as it sounded like an improved option. It turns out the steel is heavier, but the shape is wrong. This is my third piece of Spectra Premium metal, and all 3 have been poorly fitting, or improperly cut. In this case, you can see its over an inch too long. I went ahead and ordered Dynacorn to replace these and they went in with very little work.

Along the way, it became clear it was going to be more expensive to cut the rust out of the passenger side shock tower and aprons than it would be to just get a new one of those as well. By the time I am this far into new metal, I have given up on keeping anything original. This also addresses the concerns about the standard rust spots where the aprons overlap though.

Next, the radiator support is screwed in place. So far, everything is just clamped and screwed while fitting is being done and adjusted. Things are lining up pretty good though. The radiator support came with the cross bar already attached as a sub assembly. The one piece export brace is also bolted on to ensure good geometry with the shock towers.

Some problematic parts were removed from the top body. Essentially, the rear end damage made it clear the previously replaced tail light panel was going to have to go. Additionally, the rockers were an issue in the front half, so I just purchased the full rocker assembly. The quarters were previously replaced, but also had evidence of dent pulling and a quarter inch of bondo over everything for some reason. The kick panels below the cowl sides also had to go.

At this point, I pretty much have the top of a fastback that would be a good source to transplant on a coupe. Unfortunately, I am so far into this that the coupe part is already constructed from parts. Or at least being constructed from parts already purchased. I just tell myself at least I have all new sheet metal. In some cases, like the doors, I have an improved design as well.

The top was set in place for the first time to test the fit. Things look pretty good as it is starting to have the rough shape of a car again.

One area that was an issue was the B-pillar, mostly on the passenger side. The inside support was rusted clean through, as well as the inside panel of the B-pillar itself. The rest looked reasonable, but this area itself poses a couple of problems. First, the support panel is not reproduced for non convertibles. Next, the B-pillar parts are only sold in the 4 piece set (both sides, inner and outer). The path forward includes buying the set, and fabricating a support.

The “after” picture is much later, with the top on the new floor. No need to do the oval cutout since the wire goes down the driver side and I wont need to access the inside of the pillar on the passenger side.

Time to start some welding. Starting from the center, the upper and lower cowl are welded in place, along with the little gap cover to the aprons.

After some work in the back, Randy wasn’t happy with the trunk divider in several areas. The part where it mates to the floor was thin and rusting out, so I ordered one of those as well. Dynacorn comes through, and its a nice fit.

It’s kind of hard to tell from the picture, but the rocker panel was about a quarter inch too thick. It would not sit flush with the quarter panels or fenders. They ended up having to cut a strip out and weld it back together.

From the front, its starting to look like a car again. New doors and fenders are fitting pretty good. It looks like I will be able to use the original front valance and stone guard. Small wins.

From here, it looks like things are starting to move. There is still a lot to do, but its taking shape. Still no dash, and the whole back end is missing, but its making good progress.