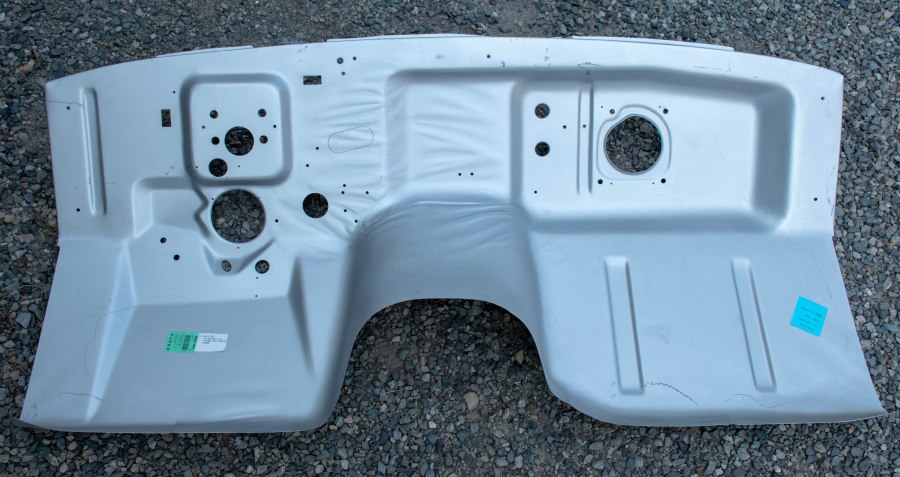 The new firewall replacement came in. I ordered the Dynacorn, which appears to be sold everywhere. I saw that Jo Daddy’s Garage used the same one in weld through primer, so I reached out to him to see how it fits and got a positive response. In the end, I opted to order it from Mustangs Unlimited due to the free shipping. I expected some damage courtesy UPS, and I was not disappointed, but it was only minor and easily corrected. The alternative of $250 in freight shipping for at $240 part wasn’t easily reconcilable here. In the end, the gamble payed off.

The thing I didn’t like was the waviness of some of the flat surfaces. I saw this on all of them at the various vendors, so I expect to have to do a little hammering with a body hammer to minimize it on visible areas. For mine, I will probably only try to clean up the top most area just under the export brace. The rest wont be visible with an engine in place.

Curious on the attention to detail, I took some pictures so I could inventory the various cut outs compared to the original. Mostly good, with just a few small areas needing correction. It also looks like my original didn’t have too many extra holes over the past 50+ years either.

I didn’t take a good picture from the engine side on the passenger half, but I did get one from the inside of the car. This side looks pretty much spot on. I can’t say I know what all of the smaller holes are for, but I can at least say they were there originally, and not added by a previous owner. 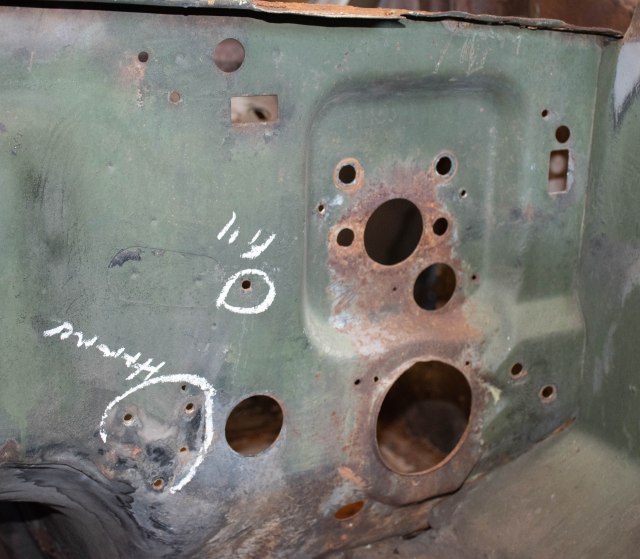 There are a few issues on the driver side. Starting on the top left, the rectangle where I think the 65 wiring comes through is fine. To the top left of it, the larger circle is both too small as well as in the wrong location. On the 67, that would be the engine wiring bundle, but I’m not sure what it is on the 65.

Down from there, to the right of the oval cutout, it looks like Randy thought that one hole is not original, but it appears to be. No idea what it’s for. But the extra one on the repo to the bottom left shouldn’t be there. Below that, the triangle of holes for the accelerator pedal are there, as well as the other 2 holes around it that are currently of unknown use.

Steering column and parking brake cable holes look right. But to the right of there, the mounting bolts for the paring brake handle are mirrored. They also appear to be on the wrong surface, below the point where the frame rail covers the firewall. That’s going to need fixing in order to mount the parking brake handle.

Up from there is the rectangle for the front light wiring and a hole to the top left of it, but there is another missing. On the 67, that is where the washer fluid hose would go, but I also think that’s a 67 unique thing. Not sure what the missing hole is for, so I will have to do some research.

All in all, it looks like only one area really needs fixing (parking brake bracket) and the rest may not be required. Fortunately, its mostly drilling, not filling. Assuming it all fits well, as I expect, this appears to be a pretty good part. It should save some time trying to save the original, or at least the half that still has structural integrity.

With the firewall order, I thought I would see if I could find a better battery apron. The replacement that came with the car wasn’t great so I took a $45 gamble that more recent reproductions might be better. I am pretty pleased with the results.

I ended up ordering a Scott Drake assembly. This part has the headlight bucket attachment bracket already welded on, as well as the reinforcement on the bottom, under the battery. Buying those parts alone would be half the cost of the assembly, not counting the cost of welding them.

Everything looks really good on it. There is some waviness on the right side, and the bottom of the indention, but its minimal. 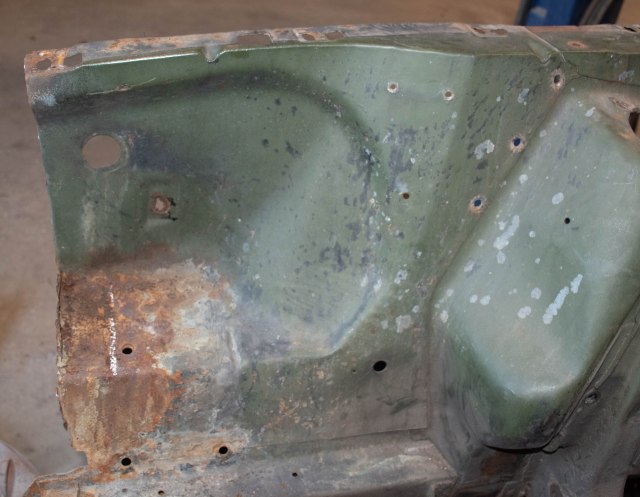 Looking at the stamping and holes it looks really good as well. There are a couple of holes at the top of the inside that are not on the original. The replacement also doesn’t have the rust hole in the center where the headlight bracket is welded to, so that’s a plus. With this being a 65, the VIN isn’t stamped on this apron like it is on the 67, so no worries about dealing with that either. Over all, pretty easy choice, particularly since the front where it’s welded to the radiator support is rusted away and patched poorly.

The top holes all line up and look good. I have to say I’m surprised, honestly.

From here, I think Randy has everything he needs to start replacing things and putting things back together. At least from the front windshield forward anyhow. The last piece I think I need to find in this area is the driver side torque box. The previous owner bought the passenger side 2 piece, which is nice, but I need to match it with the driver side. Not necessarily required, as it’s not an original feature until 67, but they added it for a reason, so I might as well since I’m at this stage of disassembly.