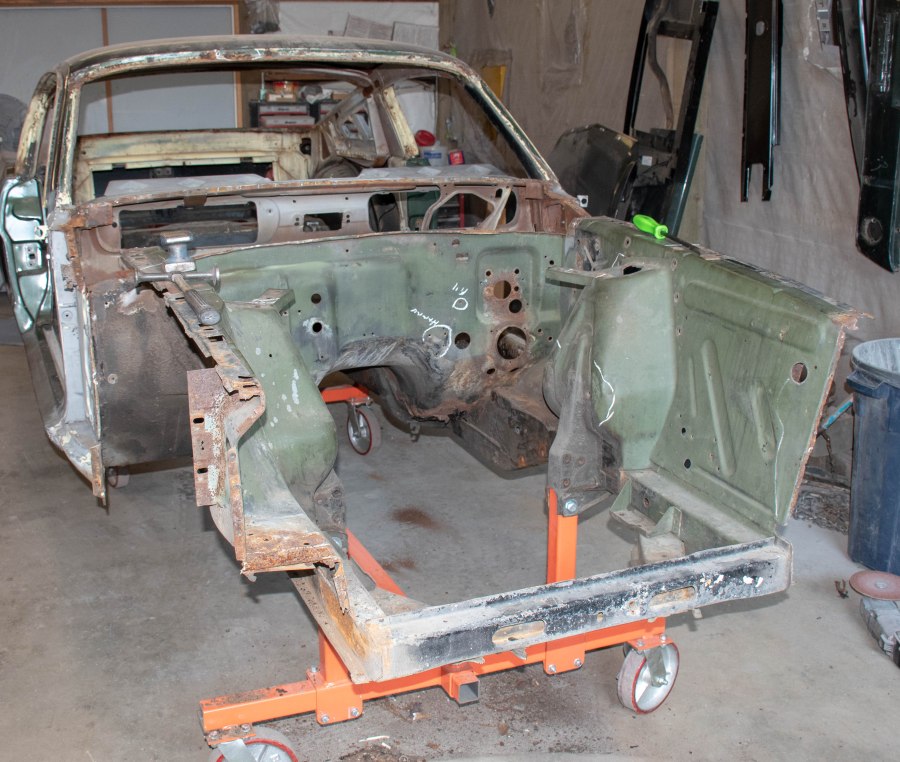 Core work has started on the fastback. As I really dig into it, I found some significant issues that have caused me to be a little more drastic than I would have hoped. The value in this car really is all the good parts it came with, and the fastback C code VIN. When done, there won’t be much of the original body left, but it will be like new. Better in some ways.

First, I decided to go with a one piece floor.  This is different than what many of the parts vendors call a one piece floor in that its everything on the bottom from the driver foot area back to the bumper attachment points. Normally, the floor is only the floor from the firewall to the back seat. I found some issues in the trunk and frame rails that caused me to just bite the bullet and replace it all. The trunk area was an amazing patchwork of materials including fiberglass, rivets, and silicone adhesive. Fixing things would probably cost more than just scrapping it with a whole new floor assembly, so I did. 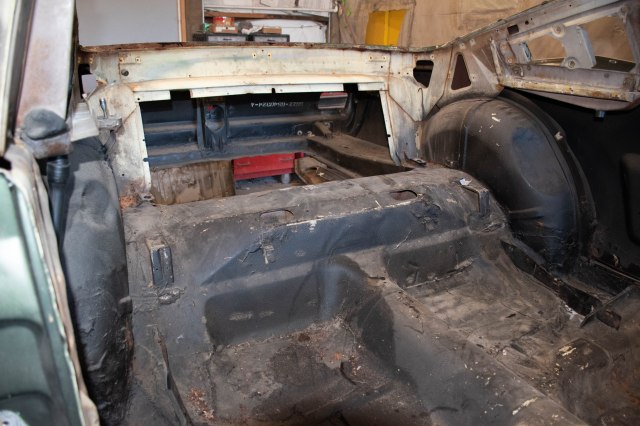 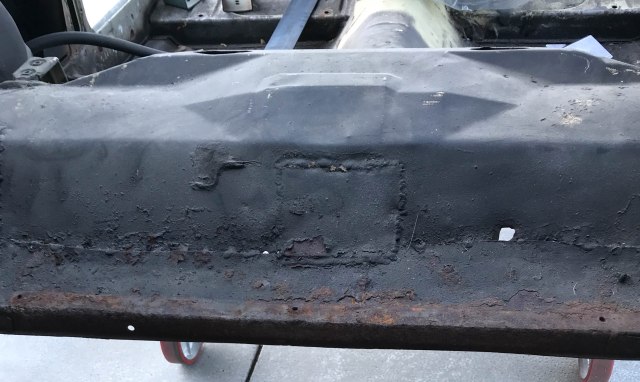 I knew some of the rot was there from my initial inspection. I also saw the welded frame rail which went a good way to convince me to do the full floor with new rails.

But really looking at the wheel wells, you can see 3 distinct patches in the one half of the wheel well on this side alone. Those are going as well. Will be a lot easier to do with the floor gone. 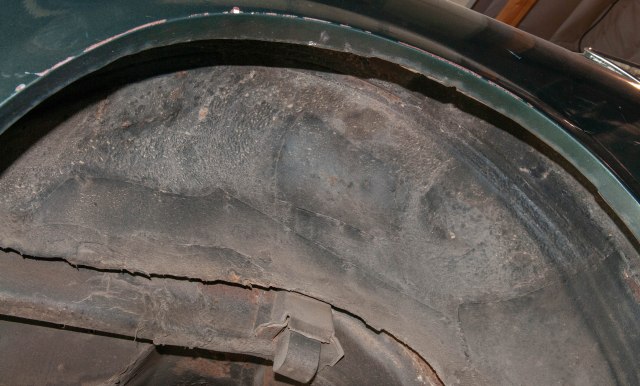 There was also evidence of a rear end collision, and some additionally hackery. It’s nice that they used a NOS tail light panel, but then hammered it in to fit with all the other bent up parts. The support is also cut up and welded in sloppily. I have no idea what happened to the gas tank drop off. It looks like it was cut with tin snips. 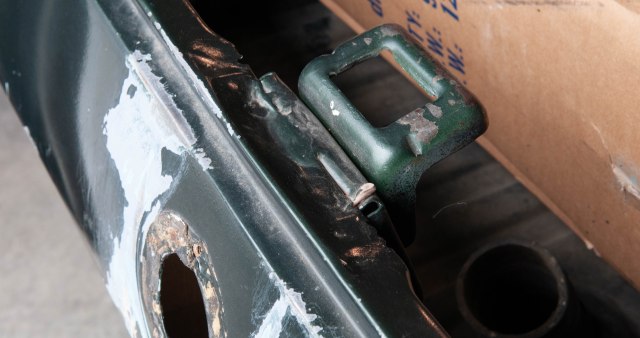 So, I ordered the entire floor sub-assembly. Originally it was out of stock and I was queued behind some other work, but after a couple months it was available, so I had it shipped. Truck freight directly to the shop. It came in a big card board box, on it’s side like shown. You can see the box on the truck behind it. 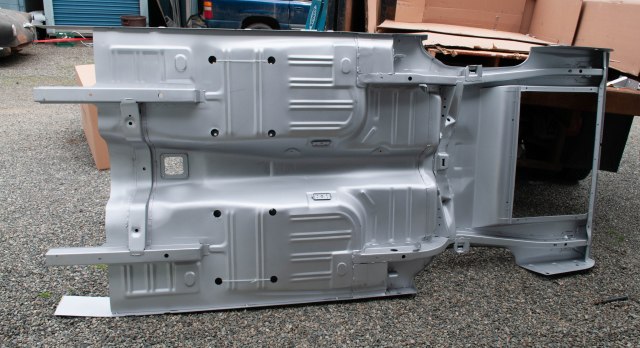 I am a fan of this part. It’s a nice quality steel and has good attention to detail and welding. It also has some heavy duty floor pans, which are not attached, just zip tied in for transit.

Learning from the 67, I see I need to do the modifications for the exhaust with the rear rail hangers and supports in the back seats for the dual exhaust holes.

When I bought it, the cowl work was already started. The previous owner had been working on removing the cowl and had already purchased the new top and bottom cowl. Plasma cutters look like fun. 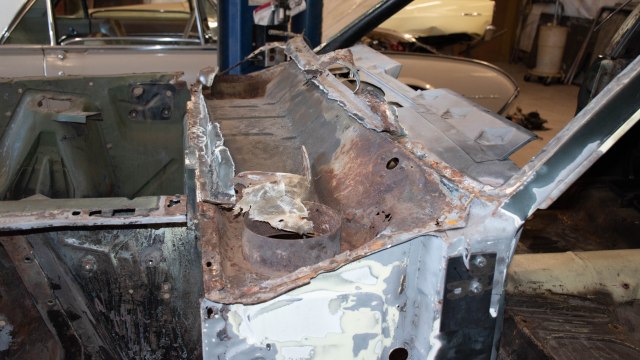 You can see why it needs replacing. Another great patch from an earlier owner. Again with fiberglass and silicone adhesive to fill all the things. 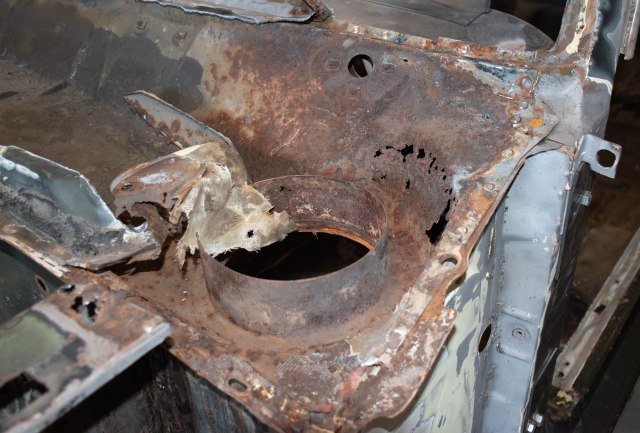 Once Randy was able to start spending some quality time with the 65, it didn’t take long to peel back the onion.

I thought this might also be a good opportunity to fix the cut up stereo. I can’t imagine ever having it more easy to access. This is looking at it from the engine bay.

Inspecting the front during the cowl removal made it clear that the possibly salvageable driver frame extension was not going to happen. Since the shock tower was beaten up and welded back together, I opted for the single piece driver side frame/tower/apron sub-assembly. I was super excited to see it arrive as it was pretty much a perfect match to the original (minus 50+ years of abuse). 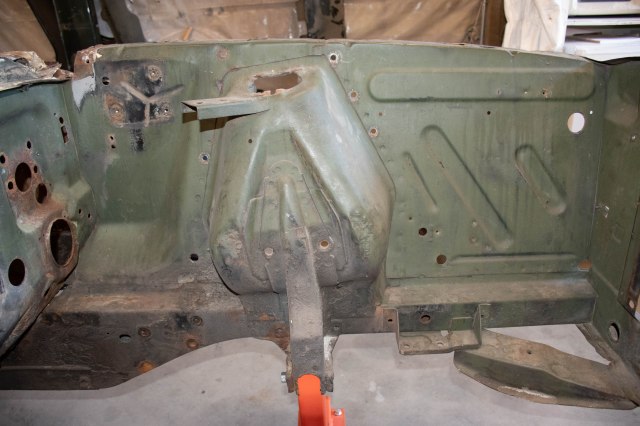 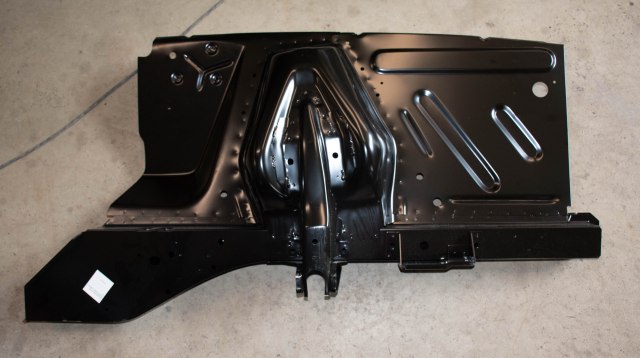 Next, I noticed the firewall was also having some structural integrity issues. Each top corner was effectively missing. While it did come with the patch panels to replace those, it also had some holes at the driver toe board. Combine all of those and it costs more to fix than to replace. With the cowl out, the only thing holding the firewall in place that isn’t going will be the passenger side apron.

It was also clear from the start the radiator support was going to need some work. Since the car came with the sub-assembly, it went away. 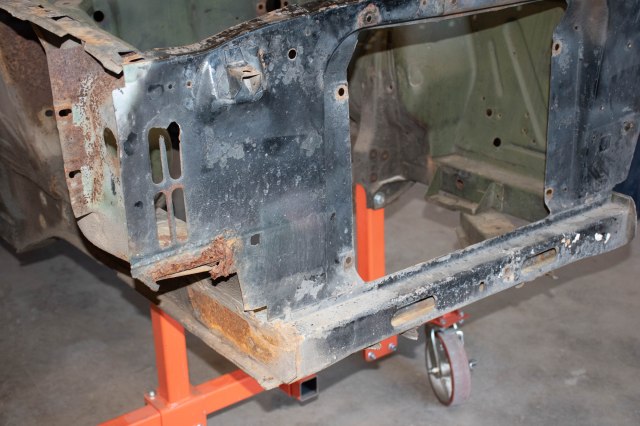 By the time we get to the end of the cutting, I think the only thing original in front of the dash will be the passenger side shock tower.

That’s where it stands now. I am at the “waiting for parts” stage again with the firewall in flight. I am checking out a new battery tray too since the repro replacement part it came with was poor quality. Rolling the dice that something made after 2007 is better. Once we get through replacing everything on the front and clamping it in, I think the floor is going to get cut. Randy is probably going to need some more clamps.

2 thoughts on “Making a Metalwork Plan”