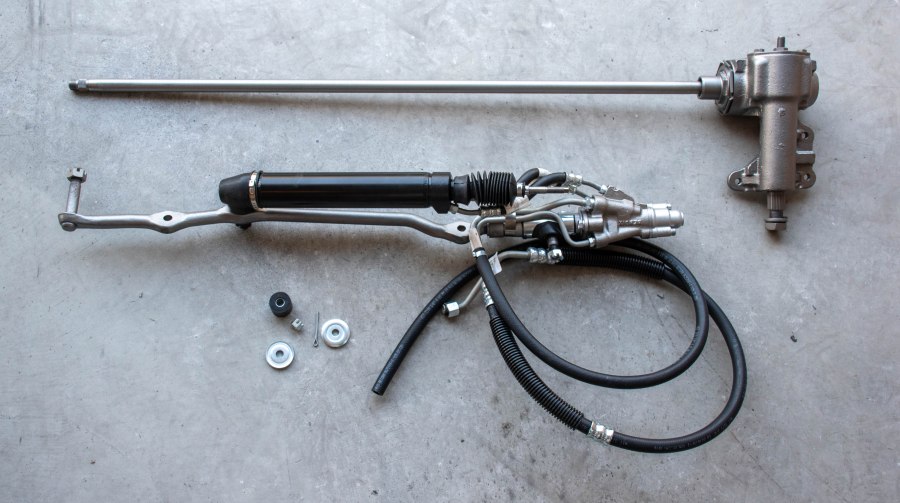 When I bought the convertible, it had an issue with vibrations around 50 mph. I thought it might be related to the suspension and bad alignment that was evident with the wear pattern on the front passenger side tire. When I replaced the brakes with disc and refreshed the front end, I expected the vibration to go away, but it didn’t. With everything else replaced, the only part left is the power steering, so now its time to rebuild that.

This car did not originally have power steering. While most changes are period correct, not all changes are complete or accurate. For the power steering conversion, the parts look generally right, except for the hoses, but the manual 19:1 steering box was not replaced with a 16:1 power steering gear box. This leaves excessive steering wheel turning for no good reason.

My plan of attack was to call Chockostang and see what he had available already rebuilt, then just send him mine back as a core. I was also going to buy the 16:1 gear box. Unfortunately that plan didn’t work out since Dan did not have a quick ratio gear box. He did have a rebuilt 67 power steering setup, so I started with having him ship me that, with the expectation of sending back mine for a core, minimizing down time waiting for shipping both ways.

For the gear box, I reached out to Rick’s Pony Parts who had several to choose from. He even has a 67 in the yard with the whole power steering setup still in the car. I opted to not spend time on the ground pulling the power steering and gear box, and just bought one out of the warehouse. Either way, it was going to get shipped to Chockostang to get rebuilt.

The one thing I knew about, but didn’t check, was the sector shaft size. I should have paid more attention and gotten one with a 1-1/8″ sector shaft if he had one. The odds of him having one are small since that would only have been a late 67, and the 1″ would have been for any 65 through early 67. So, I ended up with a 1″ sector shaft 16:1 gear box that I had Chockostang rebuild.

So this is where I started. Shiny new power steering and center link, plus a freshly rebuilt steering gear box. With the car up on the lift, it’s time to start pulling parts.

Everything has an oily sheen, and hoses are routed all over the place.

Fortunately, I have been under here recently and much of the steering is new, so should come off easily. I already have an Opentracker roller idler arm and new tie rods. The new power steering comes with a new center link, so I need to drop the tie rods and pull the idler arm to get it out. The passenger side is pretty easy. The driver side is where I had issues.

The end of the slave cylinder end was bent, and the bolt was rusted in place. Power steering must have been added a long time ago. I ended up having to grind off the bolt since it came pre-rounded by someone else who also had issues removing it. With a slave cylinder rod, I am not sure how rebuild-able it is at this point. With enough power tools and cursing, I was able to get it free though.

As I look at the pitman arm and start figuring out how to get it off, here is where I realize I have the 1 1/8″ sector shaft since I don’t have the right socket to take the nut off. The larger shaft requires a 1-5/16″ socket, where the smaller one takes a 1-1/8″ socket. The smaller I have, the larger I don’t. This may become an issue during lockdown since I can’t get one locally and Amazon is in “essential mode”, quoting 3 weeks delivery for non essential items. The shop manual says the pitman arm needs to come off to remove the box, so I will be figuring out of that is suggested or required. If it’s not required, and I can source a local 1″ pitman arm, I can keep making progress even without the larger socket.

With everything out, its time to reverse course and start putting things back together. First is the new gear box. I cleaned up the bolts by blasting them, then coating them with a little oil to try to keep them from rusting immediately. The new box without a pitman arm went in without any issues, and bolted right up.

From there, I loosely put on the idler arm so it could move around, and put the center link pin in it. With it connected, I torqued the idler arm and connected the tie rods. With the center link mostly attached and supported on its own weight, I bolted in the piston with the new supplied bushings and hardware.

From here, it’s time to put the car on the ground and work from the top. I still have to get the pitman arm, so I am going to push that off until last and button up what I can without it.

With the new box installed, I went inside and put the steering column on over the shaft. With the box torqued down, the shaft will fit just fine. I was initially worried I should have left it loose and that I would run into the top or something. I guess I didn’t need to worry either way, since its a convertible, but it fit fine without getting close to the roof.

This is before I put the clamp on the bottom where it bolts to the dash. I was careful to put the wiring harness back in place when I put the column on. Once it was in place, I put the upper retainer and spring in place and put the arms back on.

Everything is back together except the wheel. I initially had an issue with no horn. Then I remembered I needed to pull the steering column up towards me before I tightened down the under dash retainer so that it made good contact. I loosed the bolts, pulled it up to close the gap by the wheel a bit, and locked it down. Horn works, must be right.

To install the wheel in the right position, I put it on and turned it all the way to the left, took the wheel off, and centered it. I then turned it all the way to the right, counting off 4 turns, plus about 6 fingers worth. I took the wheel off and moved it towards center by about 3 fingers. I then went to the other end and checked to see if I have about 3 fingers there too. This should be a pretty close starting point once I get the pitman arm installed. If I remember from the coupe, it only goes on in 90 degree increments, so I can’t get it installed off center.

Back to the engine compartment to put the hoses on the pump. If only it were that easy. I remember the previous owner mentioning something about rigging up an adapter since the hose was not right. Now I see what that is. The pump has a female fitting. The 67 hose needs a male fitting. The adapter addressed that.

The power steering pump looks right, but the pressure connection is female. When I go visit Rick, I need to see if I can get a 67 pump as well. I know he has one that’s a bit beat up, but its less beat up than this one. Plus, I know its a 67 since its still on the car. At this point, I had to take a break for a few days to work on getting those parts. Back to the old side project of “waiting for parts”.

Getting back to work, I have a “new to me” pitman arm for 65 to early 67, which looks like it will do the job.

On my adventure to Rick’s, I learned that I have a 70+ power steering bracket. The pre 70 is aluminum and a different style. I brought one home with an old pump that looks like it is correct for a 67 with a 289. I plan on shipping it off to Chockostang to rebuild and make pretty again.

The bracket has a C7A casting number, so it appears to be at least a 67 bracket. The 6 cylinder has a different mounting bracket, so this is at least correct for the 289, and probably the 390 as well.

Since I need to have the pump rebuilt, I decided to temporarily put the old one back in with the hose adapter. It’s not pretty, but the system is closed and not leaking. With the strange return inlet on the old pump, I had to get creative with the return hose routing for the short term.

With the slave cylinder already attached to the frame rail, I couldn’t reach the upper pitman bolt with a socket. So, I took it off again and let it swing out of the way while I torqued down the pitman arm bolt. Getting the slave cylinder back in was a little more work this time, but not difficult.

While I was on my expedition doing mustang archaeology in Rick’s yard, I learned that I don’t have the hose hold down that keeps the hoses off the exhaust. On top of that, Rick sold his last one just the day before. I have an issue with routing being too close to the exhaust manifold, and not really anything to zip tie to, so I need to wait for parts again.

I was able to take the car for a quick spin around the block and the steering felt great. The new quick ratio made a big difference in feel, and the responsiveness is spot on. No more slack. I do have to go back and adjust the steering wheel for center, as it is about 45 degrees off. With the wheel centered for the full range of turning, I probably need to adjust the tie rods to keep my turn radius equal for both sides. I need to re-check my toe in after messing with the tie rods anyhow, so may as well get the details right while I’m there.

All in all, I am very pleased with the new old power steering from Chockostang. Dan is always saying the original power steering isn’t bad when its new, but we all have our experience set after its had 50 years of wear. With all the things done to freshen up this car, it now drives like when it was new. As it should be.