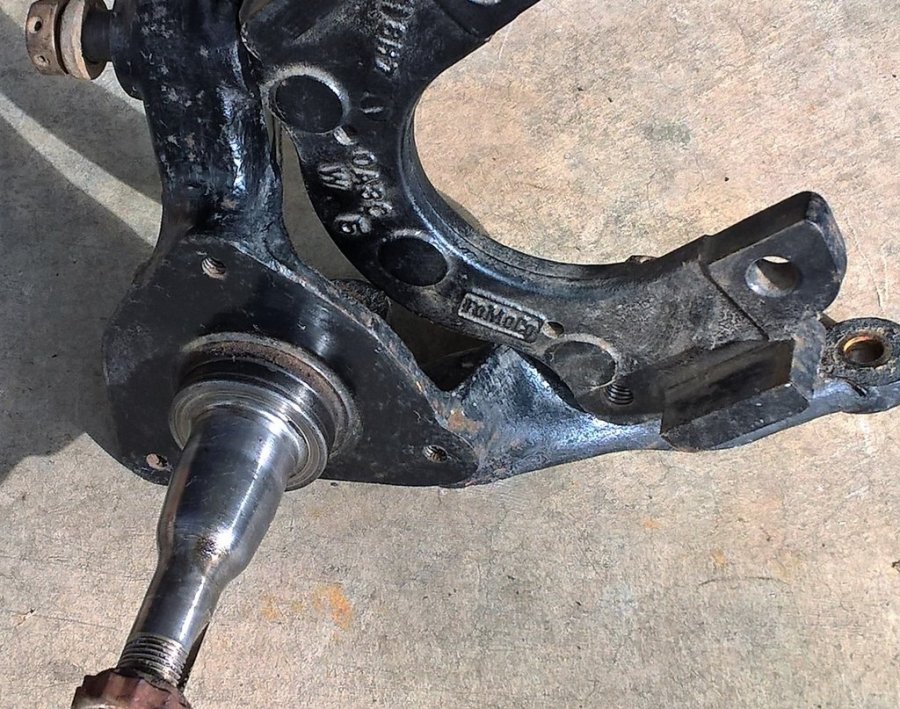 Years ago, I thought it would be a good idea to replace my original 6 cylinder, 4 bolt drum brakes with 5 bolt disk brakes to match the 5 bolt rear end I have.  It just looked wrong with mismatched bolts front and back, and disks seems like a great plan.

I salvaged a set of spindles, rotors and calipers from a totaled 64 Ranchero that had been setup for racing. I swapped my original spindles for the new setup just before I parked the car for years. This was roughly the same point I was replacing the engine, which also has yet to get closure.

So here I am, 17 years later, trying to get it back on the road again. I find myself getting sucked into the details of all of the various configurations of front suspension that can work with the variety of classic mustangs. Of course, one of the first things I learned, is that in 67, there is only one spindle. Regardless of disk or drum, 6 or 8 cylinder, it’s all the same spindle. I wish I had known this back before I took those off and did who knows what with them. Ah well, back on the path forward.

Looking at what I have, there are a few distinctive points that are quickly noticed.

In learning about spindles, I noticed this has 3 holes at the base of the pin, not 4 like what would have been on my 67 originally. It also has this strange caliper bracket which I didn’t find in many searches.

That’s for the single piston caliper. Knowing little about brakes, the idea of a single piston seems odd to me. I guess we are talking about technology nearly 50 years old. I have a feeling I am going to learn more history and eventually understand how this all worked out.

The calipers had a part number on them, but that didn’t get me far with Google. The more I found, the less relevant the caliper part number seemed to be. The key was in the spindle, and the after-market brakes don’t use this or the bracket.

But for the record, here is the caliper bracket. It’s one part with pretty clear numbers. Of course the spindle is the one with the worst casting numbers to read.

Looking at the forums, I repeatedly see Dan @ Chockostang speaking up as the man who knows what there is to know about mustang brake systems. I found this post pretty much closing the case on what these spindles came from. That should make it easier to order the Wilwood aftermarket 4 piston disk kit. The last question was the rotors that I have.

I have these spider infested rust buckets for rotors. They are about 11 – 1/4 inches. I also found some evidence that this lines up with the spindles identified at 68’s. I imagine this will lead to a conversation with Wilwood on what the right kit to buy is. I wish I still had my original calipers to measure the OD of the spindle itself.

I had these on the car so that it would roll for the past 17 years so I know they line up with all the right places with appropriate connection diameters. I have never had them driving, but at least I am pretty sure I wont be having the same issues some have with parts not reaching or fitting. That should get me moving on to the parts purchase and assembly of the upper and lower control arms, springs, etc in the next week or two. By the time I finish that, I hope to have the remaining questions on what brake kit to order resolved.

These spindles are from a 68-69 disc setup. They have the single floating caliper design. The pin is a smaller diameter than the 70 spindle, but otherwise the same. The preferred spindle would be the big pin from a 70 disc setup for strength, or a 67 spindle and go with the stock style Kelsey-Hayes 4 piston calipers, making it easy to find replacement parts.