Continuing with the front end assembly, next thing is to get the stone guard on. In order to do that, I am pretty sure I need to find it first. It turns out I had wrapped it up with my front valance in the moving blanket when I moved. Crisis averted since it is already painted and I don’t want to deal with that.

One of the additional parts orders was for the stone guard mounting brackets, which I didn’t realize were a thing. They are kind of out of the way in the NPD catalog and since I didn’t know I needed them, I missed them on the first order. But I got the mounting hardware! Though it turns out the mounting hardware is for mounting to the brackets, not mounting the brackets to the car. Fortunately I have a pile of extra fender style bolts which appear to be the universal bolt on this project. I also have some spare clip nuts that are required for bolting the brackets to the radiator support. The kit did come with the clips and bolts for the center bracket which mounts to the hood latch pillar.

Here you can see where the clip nuts are for the center as well as the driver side bracket installed. You can also see these were original, or at least not new since they were not removed prior to painting.

My next dilemma was with how the stone deflector bolted on to the fender extensions. These are reproduction extensions, and it seems drilling the holes for mounting the stone deflector was not part of the plan. Note in this picture, the bracket is over the extension end just to show where the hole should be. It mounts underneath when final assembled.

So I used the deflector as a template before I mounted the clip on bolts. I just used a black sharpie to mask out where the hole was and drilled a slightly bigger hole in the center. 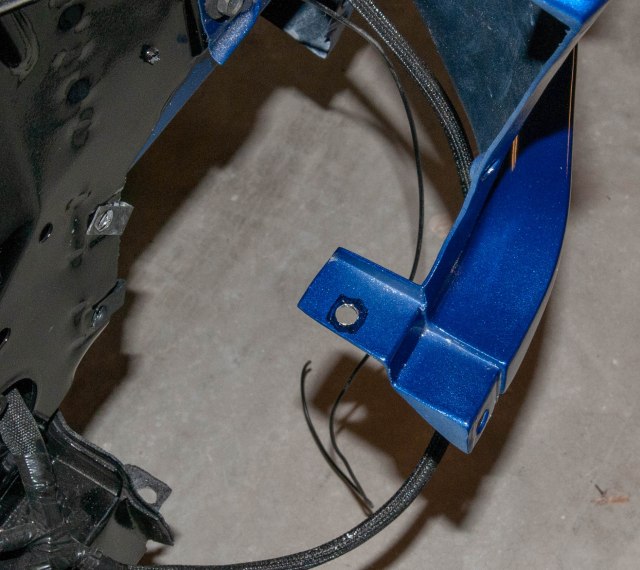 Not pictured is the bracket which I took off for drilling. When I mounted it, I made sure the fender extension was on top per advice from another mustang enthusiast.  The stone guard was then able to be mounted to the brackets and fender extensions.

Now that I have the stone deflector in place, I hear that I should probably put the grill in, and the wide moldings that form the bottom and sides of the grill border. Something about not being able to access the bolts once the valance is in place.

I started with dropping the grille in place to see how it fit. Out of the box, I could tell that it was flatter than the original, but it was also flexible, so it looked like bolting it in place would allow it to flex and contour to the correct form. First fit, everything seemed to fit good.

There were 3 clip on screw thread things, like captive nuts, but for screws, that had to get clipped on the stone guard supports to attach the bottom of the grille to. As you can see, if you forget, you can still move the grill forward and put them on. So long as you didn’t already put the wide grille molding in. Personally, I found I could leave the grille in place, but not locked down and still mount the wide grille molding in front of it.

As I went, I put all the bolts and screws in loose to make sure things would fit and I didn’t forget anything. I went back later and tightened everything up after the wide molding was in place.

Like the grille, the wide molding and the thin molding were both reproductions. My thin molding could probably be saved, but the replacement is good enough here. I don’t want to spend the money to have the dents removed and polished on a part like this. For the wide molding, I had some holes in mine where the previous owner did some modifications for installing grille lights for using the car as a volunteer fire fighter. Not something to be saved. The replacements for the wide molding looked pretty good as well.

The wide molding lined up really well on the stone guard. The screws just go straight into it to hold them together. On the passenger side fender extension though, the holes didn’t line up remotely. I had to drill another hole for the screw. The wide molding required a good side mount point as well since it needed to be pulled out about half an inch. The driver side went on with no issues. Other than having to drill the stone guard holes. They were punched, but not all the way through, but in the right place.

With the wide molding in place, the thin molding, or trim, went on next. It was pretty straight forward, but needed to be held in place pretty well to make it keep the right form. The bends also twisted it. The specialized clips were a bit tricky until you figure out the design. I had to bend the spring arm a bit wider for things to go smooth.

I had to remove the hood bumpers and let the top of the grille move. I found my previous optimism for the grille fit was unfounded. The passenger side was a little off center, and the driver side was way deep. 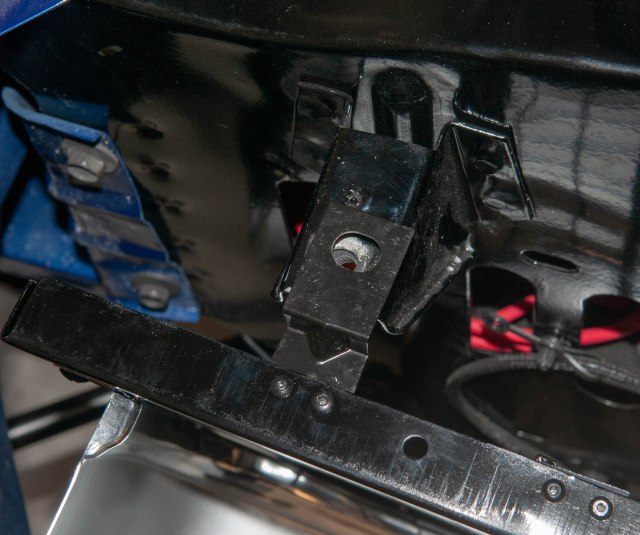 I decided to solve it with my angle grinder by taking a bit off towards direction of the hole. Still small enough to get some bite from the hood bumper. The last piece was the cheap plastic Scott Drake center cover which didn’t match at all, but it was all I had. It all ended up looking pretty good in the end though.

At a later date, I plan on putting the horse back in as well as new GT fog lights. For now, it’s not required to get it all going and I can defer the extra spend for a bit.

2 thoughts on “Stone Guard and Grille”