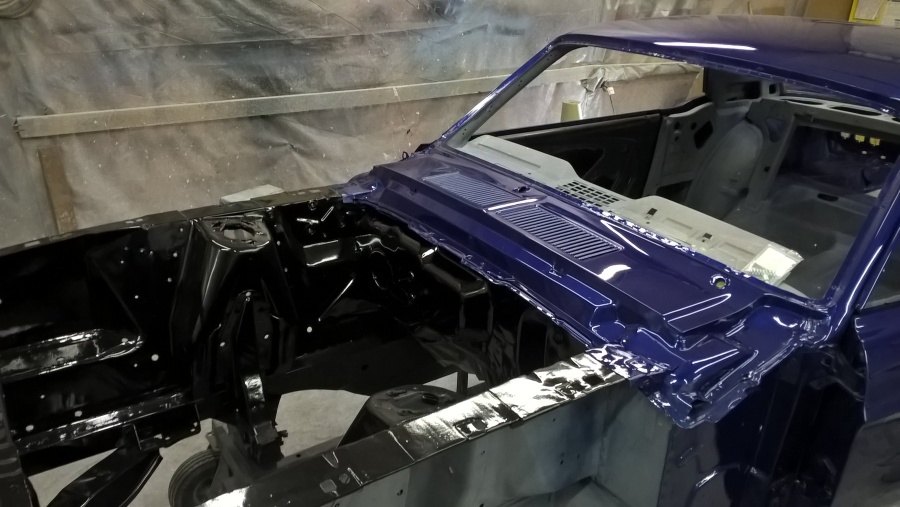 With this visit, I get to see the engine compartment painted, and the rest of the car cleaned up.

I love how the black and blue contrast. It’s great seeing the car close to final paint. Just the interior left. I also agreed to undercoat with Raptor coating. Since this is not intended to be a concours restoration, but still be a durable driver for many years, I wanted to have the weather protection for the underside and the wheel wells. You can see the primer here still. Those will be black Raptor by the time I get to see it again.

The funny thing is that this is about the point I thought I was at when I started restoring it. Aside from the truth under what you see on the surface.  I thought I would start with just fixing the rust holes in front and behind the shock towers, paint the engine compartment, and drop a motor in it. I was planning on gradually cleaning up the rest along the way. I am very glad I didn’t take that route. I had no idea the amount of rot just under the surface of everything. I also would not have been able to do the full body media blasting to reveal how much body filler and dings I had all over. I like to think finding those and fixing them is a good thing. At the cost, it’s hard to not second guess at this point. I expect when its all assembled, and solid metal, with no more Flintstones action, I will be done with any second guessing. I know myself well enough to know that if I see an issue, it will eat at me until I can fix it. This approach at least alleviates any of those concerns.

Looking back over the past 6 months, I have to laugh at some of the facts. Most of the blue you see in this picture is new metal. New cowl vent, new door, new quarter panel, new tail light panel. The roof and posts are original. The substructure in front of the door is original.  On the inside, all the gray parts are original though. When my friends ask me how much I had to replace, I like to point out the rear deck where the speakers go and say that part is original. That’s a bit of exaggeration, but not much. You can look back to see how much of the core car was left after media blasting. The fact that it looks so good now is a testament to the solid body work Randy’s team did.